The Great Man 'on Horseback'

What is the benefit of paying attention to the news?  I can think of one: some top story in the news might spark or revive an interest in a book.

For instance the recent election in Italy made a splash.  The corporate media immediately began calling her "far right."  This bumped me to reread the biography of Mussolini by Nicholas Farrell. 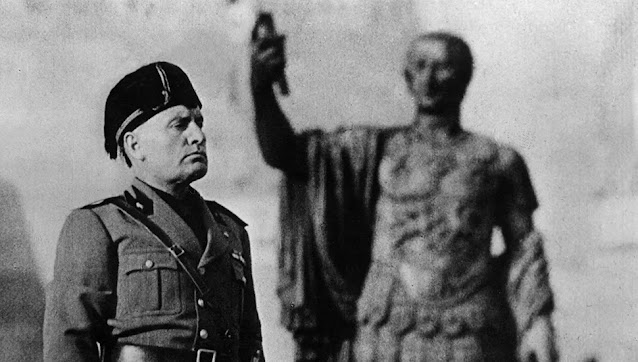 Mussolini certainly had an interesting life.  Because he is not usually thought of as 100% evil -- like Hitler -- the reader of Mussolini's biography can actually put themselves in his shoes, as they must in order to get anything out of reading a biography.

Mussolini started as a serious and fairly orthodox socialist, but then he made drastic innovations to socialism that changed history.  Prior to World War I, socialists took their internationalism seriously.

The war changed that.  German socialists supported German war efforts.  Then socialists in other countries did the same for their governments.

"Men had gone off to fight the national enemy in a way that for fifty years Socialists had hoped in vain that they would fight the class enemy."

Mussolini worked on another strand in socialist thinking.

"Mussolini made his dramatic change of tack because he was determined to give Marx a shot of Nietzsche in order to escape the straitjacket of Marxist determinism. Men were not condemned, he believed, to lie back and think of history. Men could make history...

But war also made Mussolini realise something else: that nation had a stronger grip on men than class."

(More generally, the followers of any sect gain a lot of confidence from their belief in some Deity (holy prophet, mighty theory, etc.) making sure that their Cause ultimately wins.)

I think Farrell should have looked at the issue of Marxist determinism more psychologically: the leaders of a party or nation consider their own egos the most important thing in the world.  How does it flatter their egos to see themselves as cogs in some impersonal mechanism?

They want to be 'the great man on horseback' who rides in from nowhere to rescue the people in their moment of crisis.

Back to the present crisis in Europe and the Ukraine: perhaps an energy crisis this winter will have the same effect on modern Euro globalism that World War I had on the socialist internationalist of those times.

The second strand discussed above might figure in, as well.  Who will remember the faceless bureaucrats on the committees of NATO or the Euro Union in Brussels?

The Eurocrats must be looking at Putin with sheer envy. He is becoming 'the great man on horseback.'  It is He who is changing the world order.  Ivan the Terrible, Peter the Great, Catherine the Great... maybe another "Great" is being born.

Meanwhile, look at the runts in the leadership class of the USA and Europe!

Well, you can thank CNN, the BBC, and the NY Times for this little essay.  Somehow I don't think they would approve of it.