Monastery in the Wilderness

The Continental Divide Trail, north of Silver City NM, was more rugged than the dirt roads that I usually ride. It frequently dipped down into ravines and creek crossings, which eventually took their toll. It wasn’t long before I regretted not bringing food. Why was I resting so much? Something was wrong. I was starting to feel light-headed. It was actually a little scary. Should I turn tail and head back to the van parked at the trailhead, or plod on?
Hunger favored plodding onward, since there would be a small town and restaurant in just a few miles. Then I saw the Benedictine monastery peeking through the ponderosas, on the other side of a steep ravine. If only I could drag the bike across this ravine to the monastery, it would make for a huge shortcut back to the van. 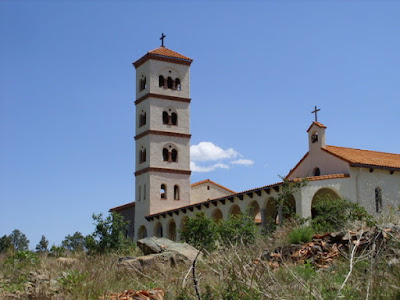 The bell tower of the monastery seemed so close! I
was half-crazy with hunger by now. Getting to that monastery was my best hope. But the ravine proved to be uncrossable; I had to face the grim reality that there would be hours of hunger and toil before making it home, via the long route.At that moment the monastery’s bell tower rang out. It was so comforting to hear that bell; so evocative of the Middle Ages when cathedral bells measured the day. It was clear and penetrating, despite all the ponderosas in the way. It soared over the quiet, background sounds of birds and breeze. This church tower bell was the last man-made sound to someone headed north from town; beyond the ravine was the vastness of the Gila wilderness. 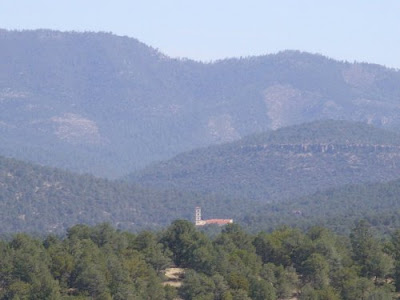 
To the world when it was half a thousand years younger, the outlines of all things seemed more clearly marked than to us. The contrast between suffering and joy, between adversity and happiness, appeared more striking. All experience had yet to the minds of men the directness and absoluteness of the pleasure and pain of child-life.

Illness and health presented a more striking contrast; the cold and darkness of winter were more real evils. We, at the present day, can hardly understand the keenness with which a fur coat, a good fire on the hearth, a soft bed, a glass of wine, were formerly enjoyed.

For at all times the vision of a sublime life has haunted the souls of men, and the gloomier the present is, the more strong this aspiration will make itself felt.

Thus religious emotion always tended to be transmuted into images. Mystery seemed to become graspable by the mind when invested with a perceptible form.

A couple years later I mountain biked to the same monastery from town on an easier approach. After getting there I sat down outside the chapel and listened to sonorous chanting inside, just like what you would imagine taking place in a Gothic cathedral in Europe.

Since I grew up in the Midwest with a protestant background, halfway between Lake Wobegon and Mayberry, I understand Garrison Keillor's envy of the Catholics' picturesqueness and pageantry.

I was quite happy to listen to more of the chanting, but they surprised me by coming out in a long procession and walking right by me. I was embarrassed, sitting there in my bicycle garb. I probably shouldn't have even been there. I took off my hat.