The Answer Was Blowing in the Wind

Only old people remember when beer cans or bottles were the favorite form of litter. Starbucks paper cups came up in the litter-world for awhile, but they never really established hegemony. For the last twenty years or so, disposable water bottles have been the most common litter.

A week or two ago I started to notice the appearance of blue cheapie Fauci masks as litter.  Was I reading too much significance into this? I didn't pick them up -- "safety" was my official excuse. But the real reason was that I enjoyed the metaphorical significance. 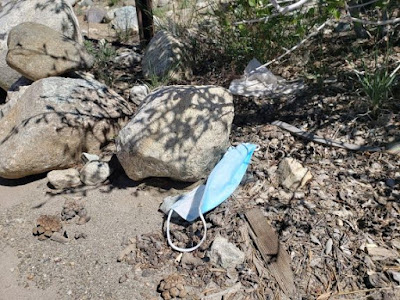 I only leave my mountain once per week, or so. Perhaps that makes gradual changes seem dramatic and exciting. Down in the city, two-thirds of the peasants were in open rebellion of the mask mandate. That is putting it a little melodramatically of course. Just say that they were ignoring it.

Even a coward like me got brave. I stuck my chest out, and swaggered into the Walmart without a mask, almost hoping that some little runt would remind me to install a mask. But the runts ignored me.

Gawd if felt so liberating! There were still people wearing masks. What was going through their minds? Seriously. I should have asked them, but nobody wants an argument. They must have been aware that the pendulum was swinging and they were on the losing side. I could admire them for having the courage of their convictions, even though I don't agree with them.

Perhaps they are braver than I was. An image comes to mind: remember those newsreels of France after being liberated from the Nazis in World War II? They took women who had collaborated/befriended the Nazis out to the public square and shaved their heads.

I felt more hopeful and optimistic in a public setting than I ever have in my life. But of course, one should not give in to hubris.

No doubt the plans for Round 2 are well-developed by now. The Media and Government might be losing at the moment, but Round 1 showed that Fear is the Health of the State.

They can turn up the decibels on the television scare machine to any volume level they want. Censorship algorithms for google search and social media are capable of vast improvement. The only jobs that have any permanence are government jobs, where the slightest infraction is grounds for dismissal. Fines and penalties can be expanded. Open defiance of mandates might make a person feel brave for a few minutes, but the most effective defiance of all is to boycott television, google, facebook, and twitter.

True heroism is not John Wayne-ish. It is better to pretend desultory compliance, while practicing insidious methods to mock and slowly undermine the sacred religion of Fear. And outlast them.