What was that squeaking sound? Was my side-by-side's brake squeaking? No, it was the large grey bird, perched on a stand at the campsite I had just driven by.

It was an African grey parrot -- the first parrot I had ever met, in person. His name was Jake, which sounds more like a ranch dawg. 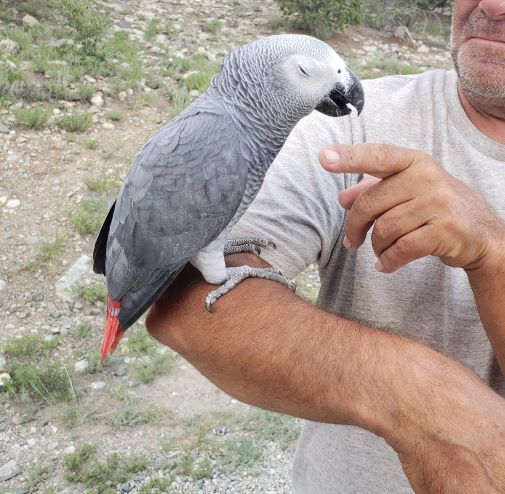 He wasn't that loquacious. He did perch on my shoulder for awhile. But the human partner said that he didn't like to be petted, and that he could bite pretty hard when annoyed.

It would have been fun to be able to imitate a salty ol' sea captain or pirate, with a parrot on his shoulder.

The human partner showed me a video of Jake when he was younger and his English vocabulary was up to 100 words. I couldn't believe the human-like intonations in his phrases. I tried to get the man to admit that he dubbed-in the talk, but he wouldn't confess. It is more fun to suspend disbelief and believe the video to be authentic.

One of Jake's reputed skills is to wolf-whistle. Later in the day a conservation group of young women/girls was walking through the parking lot. My goodness -- what a remarkable time it was in their lives: hormones spurting out their ears, vivacious laughter, giggling, and teasing.

Wouldn't it have been great if I had had Jake perched on my shoulder, as he cut loose with one of his wolf-whistles!