Hitch Your Wagon to a Falling Star

There is a place around here that I had never visited before. Think of it as a mini-celebrity of the tourist industry. For whatever reason I rolled in and had my first look.

It only took a few minutes for me to leave and camp elsewhere. What is it that scares me off from such places? Is it just snobbishness?

Objectively it wasn't that bad. Sure, there would have been a bit of litter, music noise, and loose dogs, and probably quite a bit of door-slamming. But only a small fraction of the campers at a crowded place are terrible neighbors.

Nonetheless I surrendered quickly and easily. Camping is supposed to be a soft adventure. But popular boondocking places never have a feeling of adventure to them; they just seem like shabby little hobo camps.

Finding uncrowded camping is becoming the most important skill -- so why all the harping about converting vans, on the internet? The rig isn't the problem -- overcrowding is the problem.

Visualize an electronic instrument meter with a needle that climbs up with the sheer postcard-ishness of the scenery. Steer your way toward a falling needle. Look for a high, lonesome road where your imagination kicks on.

You won't end up with a bland experience on uninteresting land. You are likely to become open to different types of beauty, such as the interplay of the Unknown with your own Imagination.

As an example, it only took a few miles, after I drove away from that little tourist trap, to sigh in relief, 'Ahh, I think this is working.' I ended up camping alone, and with an unusual -- but not postcardish -- view.

It was the Willcox Playa, a rare and dry lake. There are visible clouds of dust, moiling and turbulent, above the playa. It is an infamous place with its own mystique, like Edgar Allen Poe's "Maelstrom," interstellar dust, or the 'force field at the edge of the galaxy,' of some science fiction flick. It is impossible to photograph.

And it isn't just the dust. After a wet day, the sky cleared up, and the night time temperatures dropped. But the air was still humid. Therefore morning was foggy. 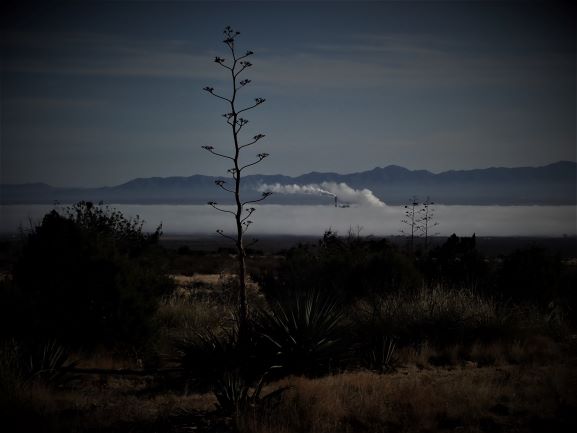 There wasn't any dust above the playa; just a large lake of fog, larger than the playa itself. Perhaps the fog was roughly coterminous with ancient Lake Cochise during the last Ice Age.

While setting up for the morning ride, every ten minutes I could see the fog bank shrink a little more, and more, just as Lake Cochise shrank over a century...until the millennia went by and only its dusty carcass remained. 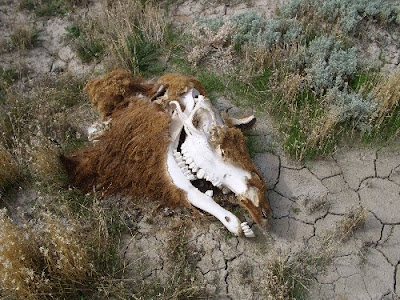 Ed said…
I assume you are seeing a lot of sandhill crane flights taking off from around the Playa in the morning.
March 26, 2021 at 10:21 AM

kaBLOOnie Boonster said…
Ed, I am not close enough to the sandhill crane area. But you'd think it would have dried up this winter?
March 26, 2021 at 10:35 AM


I'm particularly fond of "the interplay of the Unknown with your own Imagination."

And to refer to this as 'beauty' can only be improved by capitalizing Beauty as you did the 'Unknown' and 'Imagination'.

Mist and fog are my favorites. Makes me wish I could be there to see this for myself.

kaBLOOnie Boonster said…
On one level I agree with you, George, about capitalizing Beauty. But you know how stubborn Tolstoy and I are about de-emphasizing beauty in art.
March 26, 2021 at 6:28 PM

I'm going to look further into that but from what I could see quickly he meant conventional beauty.

Steve said…
Great place to camp ... now those readers of your blog will tell their friends new to boondocking where to go. LOL It's a viscous circle trying to keep camping spots empty. I know what you mean though, I feel the same way in my sticks and bricks.
March 27, 2021 at 9:57 AM

kaBLOOnie Boonster said…
Steve, hopefully I stay vague enough about campsites that I am not 'part of the problem.' I also mention that the postcard scenery is not great where I camp, and hopefully, that screens out 999/1000 armchair travelers/wannabee/newbies/weekender scenery tourists.