Can Germany Respond to the Challenge?

Perhaps someday somebody will prove that Washington DC is not responsible for the destruction of the gas pipelines in the Baltic Sea.  Let's assume that Germany will be most affected by this act of sabotage. 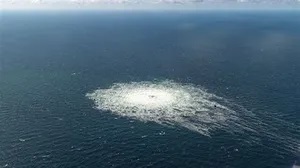 Isn't this an opportunity for Germany to rise to the challenge by acting heroically?  It would be foolish to expect this, but I need to look for mere possibilities during this meltdown.  It is too grim and depressing, otherwise.

There have been times when societies faced an existential threat and they responded heroically.  The classic example is the Greek response to the invasion of the Persians.  Or the response of a rather small number of American colonials at Concord bridge and Independence Hall in Philadelphia.

I think that the people of eastern Ukraine (Donbass) responded heroically as they voted for secession from the Kiev regime, as explosive shells came in on their heads.

There are probably more examples of this kind than we think, perhaps because we only honor and remember the heroic efforts that were crowned with success.

Another factor that escapes the history books is whether sheer desperation is necessary to stimulate a country to act heroically, that is, must a people decide they have nothing to lose before taking risky action?

If Germany were to respond heroically, what would the response look like?  Just imagine if Germany would start acting like a proud and great country once again by ordering Washington DC to leave Ramstein air base!

The opportunity is there: Germany nationalism could erase the stain of the Nazi regime by doing something this time that most of the world admires.