A Eulogy for Europe

These are significant times.  It appears that a 500-year era of European ascendancy is coming to an end.  Perhaps this should not shock anyone.  Many other civilizations and cultures have had their time in the sun, and then fizzled out.

When historians are writing about the European era, will they do as bad a job as they have with the decline of other civilizations?

Maybe it is not the historians' fault. After all, they work from documents, and maybe documents don't really contain the essence (zeitgeist, mindset, soul) of a civilization.  Therefore how can you explain 'what went wrong' with that civilization?

But back to the 'Rise and Fall' of the European Age.  Imagine you lived in 1453 A.D. in Constantinople, and you witnessed the final end of the Roman Empire after a millennium of ups-and-downs -- mostly downs.

Imagine a group of sages from around the world sitting down at a Turkish coffee shop to discuss the big picture.  At your table are a Chinese scholar/bureaucrat, an Indian mystic (with a day job of teaching mathematics), a Muslim polymath from Persia (with a day job as a merchant/smuggler), and a representative or two from the aggressive tribes of central Asia (including the Turks.)

The topic of discussion is "Does Europe have a future?"  I don't think our illustrious panel would have a high opinion of the superstitious, tall blonde, pork-eating, wool-wearing, warlike barbarians of Europe.  In fact the consensus of our panel might be, "No, they haven't much of a future and who the hell cares?"

But things had been happening in Europe over the last couple centuries.  Perhaps these developments hadn't reached a 'critical mass' yet.  Our illustrious panel might have doubted that there would ever be a huge breakout of some kind.

I doubt that any member of the panel -- with the possible exception of the Muslim representative -- would have had their eye on what Portugal was doing in the Atlantic Ocean, or what the consequences would be of mounting cannons on those ships or of a printing press with moveable type.

The rise of Europe was an amazing event that changed the world more than the rise of any other civilization up till then.  I am lucky to have been born during its time. 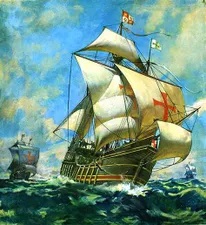