Yesterday I enjoyed running across a large herd of antelope at the same time as a herd of black cows. And they say cows are stupid! At least cows make plenty of noise for communicating with their fellow herd-persons. As far as I can tell, antelope are mute. And cows make trails useful for human walking.

The pasture was relatively free of sagebrush. The grass was green and lush. Imagine that -- something that was actually green!

It was good to be walking again. The terrain and road situation just didn't lend themselves to mountain biking. The edge of the ridgeline extended for miles. It was blessed with a merciful breeze, so no insects were noticeable.

It might sound perverse but I rather liked the haze from distant forest fires. It moderated the sun, ordinarily my arch-enemy. 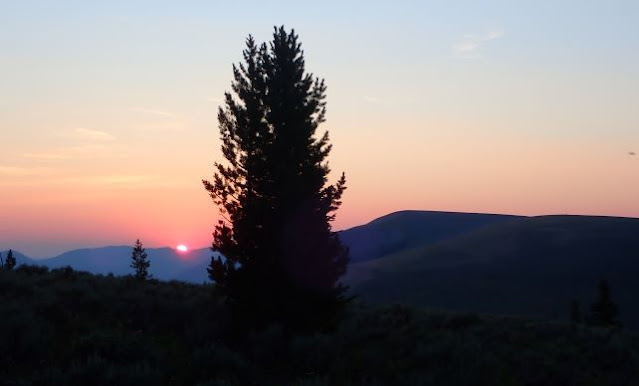 It was satisfying to adapt to the land: to take it for what it is and make the best of it. After all, what is the point of traveling if you drag yourself and your sacred preferences around with you?

And speaking of sagebrush, the other day I was getting something out of the van. I had parked a bit too close to the sagebrush, but expected to bull my way around or through the sagebrush.

And just like that I was face down on the ground. It is hard to believe a person can fall so fast to the ground. Nothing was broken but bruised ribs can make you dread an oncoming sneeze for a few days!

Sagebrush doesn't look that strong, but you can't always see the gnarly wooden stems as big as 2-3 inches in diameter. Get your foot hooked under one of those stems and down you go!

You Tube had some interesting videos on sagebrush range management. As usual, fire suppression can be blamed for mangling the land: it is the reason why monotonous sagebrush-stands tend to dominate the West at the right altitude, at the expense of herbaceous plants like grasses and flowers. How nice it is to walk through a pasture of herbaceous plants!