Finding a Castle in the Sky

Some mornings I am not in the mood for the mountain bike, and am not sure why. There might be several small reasons but they don't seem to add up to a real excuse to be lazy. So I talk myself down about the difficulty of the ride -- just take it easy, find something a little interesting, and go.

There was in fact a two track road at the top of the ridge that seemed worth checking out. I had no great expectations. Perhaps that is why the flowers were enjoyable up there -- and it was 10,000 feet. 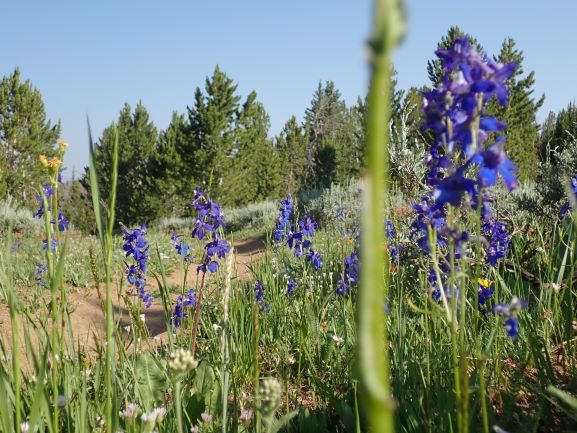 I guess that was going to be the big excitement of the day. There was only one set of tire tread marks on this dirt two-track. The forest map said no camping on this section -- I wondered why.

The top of the ridge was coming up. I knew there was a potentially grand view, but forest fire smoke would probably ruin it. But I was here, and might as well give it a chance. 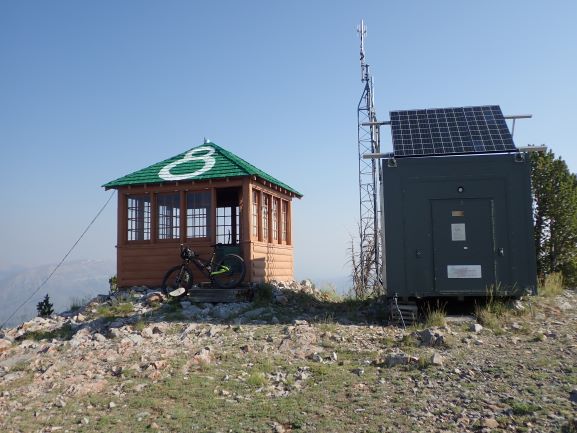 I was surprised it wasn't locked, so I went in. It was a "retired" fire watch tower built in the 1930s that had been preserved by the local historical society. There were a few old furnishings inside and some interesting posters. Apparently married couples typically did a short gig for the forest service in these towers. They had no electricity or water, but they did have a telephone. 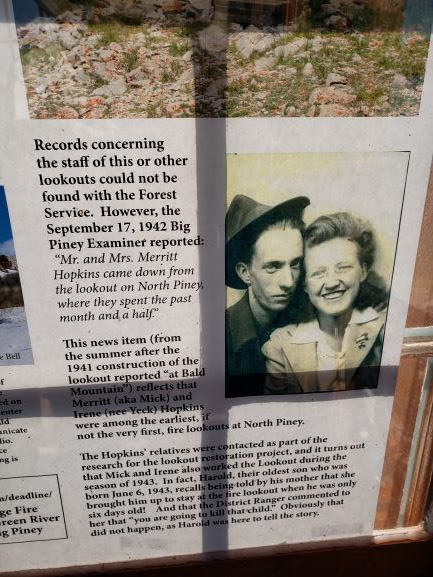 This tower had a grand view of the northernmost and most radical cutoff trail for the old wagon route system through Wyoming. By not backtracking south like the other routes, it saved miles in getting to the Snake River. From then on, there was guaranteed water all the way to the Willamette Valley.

Perhaps this place was having a special effect on me because it was multi-leveled: looking back to the 1930s in the foreground, and to the 1850s in the background. It was like visual archeology. Maybe the forest fire haze was a good thing. Think of it as a metaphor for peering into the past.

The signs encouraged visitors to sweep out the tower, so I swept out a couple hundred dead sweat bees. And then started the return trip back to camp. I had to smile at the complete lack of signage giving this tourist attraction away. 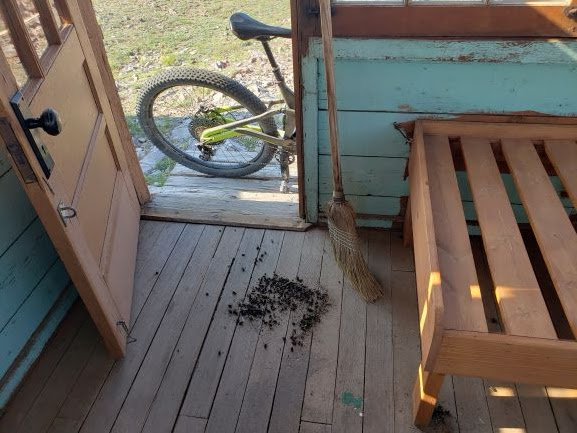 In Colorado there would have been bulletin boards, brown carsonite stakes, and bumper-to-bumper UTV or Jeep Wrangler traffic on this ignored, understated two-track road. At the top there would have been a big parking lot for the tourist hordes; thumpah-thumpah music poring out of the machines; and a dozen trash cans for holding all the disposable drinking bottles.

But here in un-Colorado, the forest service has kept their big mouths shut, and a backwoods traveler was given to chance to "discover" something, and to be surprised and delighted. Sightseeing isn't about how "spectacular" the thing is.

It is more like a good joke by a stand-up comedian in front of a live audience: it really isn't the punchline that makes the joke. It is the set-up and the surprise.

It wouldn't surprise me to learn that people 'research' stand-up comedians before buying the ticket, by running to their phones. In the reviews, blabbermouths actually tip them off to some of the comedian's jokes. Then when they hear the joke -- rated 4.2 out of 5 stars -- and nobody in the audience laughs, they can't understand why.

kaBLOOnie Boonster said…
Thanks OFM. There is still lots of wonderful stuff out here, as long as you avoid Colorado and other tourist traps.
July 16, 2021 at 12:33 PM