It was delightful and even a bit funny that I stumbled onto one of the old wagon routes that people went west on. After all, I have my needs and they had theirs, and the overlap is only partial. And yet here I am. This experience was exciting because it had some authenticity -- it wasn't just scenery tourism.

Let's back up a step. I spend my time on continental land, land that some would call "landlocked." That word isn't really accurate, but it used to be. A continent was hard to cross -- it was just a tangle of obstacles. The sea was easier to cross.

Sometimes continents are easier to cross than you might first think. Look at the riverways of European Russia: you can use them to go from the Baltic Sea to the Black Sea or the Caspian Sea, with only short portages. The Scandinavians did just that back in the Viking days, and founded Russia.

Likewise North America was penetrated in the 1600s thanks to the Great Lakes and the Mississippi River system. Much of the exploration was done by French "black robes," paddling canoes.

The mountains of the western US are difficult to penetrate. But there are a few weak spots. A tributary of the Mississippi, called the Sweetwater, comes up to a half mile (?) of South Pass WY, the Continental Divide.

Immediately west of the Divide are streams that run down to the Colorado River system. That isn't the direction the pioneers wanted to go. They wanted to go northwest, to the fertile land of the Willamette Valley. There was nothing to the southwest but desert.

So how do you make it through this awkward transition of several hundred miles, until you can join up with the Snake/Columbia river system? I am camping near one of the answers to that question, right now.

The other day I was driving back from town and an antelope ran parallel to my van. I was only going 30 mph. The antelope seemed comfortable holding that pace for miles. Eventually he crossed in front of the van, as if to rub it in my face.

Their speed is a metaphor for the remarkable mobility that sometimes happens in these "landlocked" areas of giant continents. 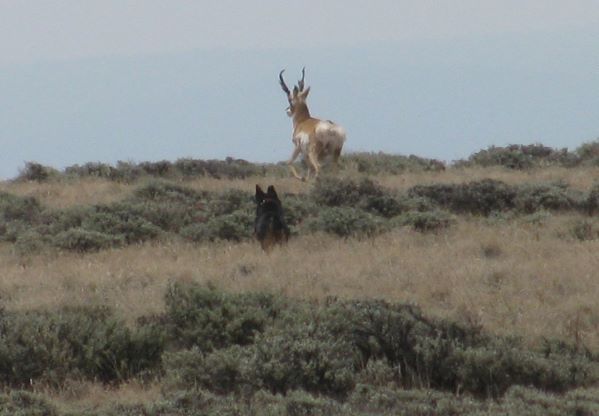