Why Is Camping So Popular?

I am still waiting for somebody to explain a bizarre situation that affects many thousands of people per year in Coloraduh. There is this enormous crush of campers trying to get into campgrounds that simply aren't that desirable in the first place.

Why? Don't worry, I won't go on a rant about everything that sucks about Coloraduh camping. The specifics are already well known and are too depressing to read.

The explanation is what is at issue. Consider an analogy: my first time in New York City, as a bit of a young hayseed, I exited the taxi from the left side of the back seat. The driver instantly tensed up and shouted, "Hey man, this is New Yawk..." or something like that. With all the traffic rushing by at suicidal speeds just a few inches to the left of the taxi, I believed the driver, took his advice, and didn't make that mistake again.

So why is there this crush of people showing up at sunset on a Friday night at a campground in Coloraduh? Couldn't the host come out and say, "Hell man, this is Coloraduh!" And then they would wise up and never make that mistake again?

In fact, many have learned their lesson. That is why Thursday night has become the new Friday night.

I can see that many people go away disappointed. They make no secret why.

It would be easy to blame the land management agencies, especially if you aren't a great admirer of government. But that is too easy. Wasn't there a time when people thought they could solve the L.A. traffic problem by building one more lane of superhighway? The same holds for one more campground or camping space in Coloraduh.

Geography is destiny. Coloraduh has the mountains that are closest to millions of people in Texas, the Great Plains, and the Midwest, as if the population of CO's front range was not grotesque enough.

But it is high time to give a constructive suggestion that is practical and fun: stay home; go to a motel on the other side of the metropolis from your work; and find some interesting food and entertainment. You will save yourself a fortune if you don't buy four wheel drive vehicles, trailers, and a thousand and one pieces of equipment. And you won't spend time packing all that crap when you should be relaxing.

But we still haven't explained why this crazy situation persists. Perhaps I will back off to give the reader a chance to come up with a brilliant explanation. (Grin) 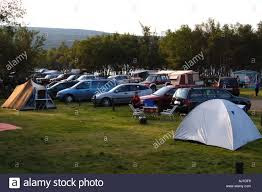 Barney, The Old Fat Man said…
I am without a clue as to why but here in Decatur Alabama the best and highest priced campground in the area is running 100% full 100% of the time even though they raised the cost a huge amount two years ago.
May 14, 2021 at 8:06 PM

“You might be tempted to avoid the messiness of daily living for the tranquility of stillness and peacefulness. This of course would be an attachment to stillness, and like any strong attachment, it leads to delusion. It arrests development and short-circuits the cultivation of wisdom.”
― Jon Kabat-Zinn, Wherever You Go, There You Are
May 15, 2021 at 9:25 AM

kaBLOOnie Boonster said…
Ed, your quote is taking me some effort to understand. Not disagreeing with it, but I'm not sure I get his point.
May 15, 2021 at 9:35 AM

kaBLOOnie Boonster said…
Barney, and the campground you mentioned is probably booked 6 months in advance!
May 15, 2021 at 9:43 AM

Rick and Kathy Rousseau said…
I remember being part of that crowd but never for a weekend but my Two Weeks Vacation. The kids loved it and we weren't quite as close as those in your pictures.
Be Safe and Enjoy!