A Tree Forever Lost at Sea

If you shop around for 'sleep, relaxation, ambient, white noise' music, they try to sell on their relaxing sounds of nature. Since when are the sounds of nature necessarily sleep-inducing?

Last night I was on another cliff-line in southwestern New Mexico. The wind was howling, although most of the fury seemed to be in the tree tops. The forest floor was semi-calm, comparatively. But it sounded like a storm at sea.

Think of the courage that sailors had until the last couple generations. It is hard for we moderns to imagine it.

Here is a photo from the archive of myself and the Little Mariner, "clambering off a lee shore" near the tip of the Baja peninsula. 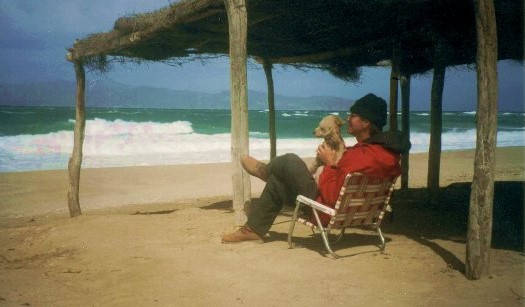 When you have been camping in the desert for awhile, it seems dangerous to be where ponderosa trees weighing tons could possibly fall on you. It happens. Remember that this area has volcanic rocks near the surface so the trees' root systems are not well-developed.

I felt under attack. But at sunset the wind fell off quickly -- not to the point of being calm, but at least the wind-noise stopped. The quietness and calmness was as impressive as the noise had been 15 minutes earlier.

By luck I happened to stumble upon a musician I had never heard of, Tina Malia. What a voice! And it sounded so perfect right then.