Casting a Shadow on the World

What good luck! I arrived on the top of the little mesa just before sunrise, that is, the vans were still in the shadow of the mesa but the mesa-top was in the sun.

As the sun crept higher in the sky, the shadow-line on the ground advanced slowly toward the vans. It seemed like fun to use my body to make a shadow on the windshield of my friend's van and then flap my arms and see if he got confused.

But there was no shadow...anywhere. I kept moving my body along the cliff-line to align the shadow correctly, but nothing worked. I was beginning to feel like Bart Simpson after he sold his Soul: he couldn't get the automatic door openers to work for him, and failed to fog a mirror.

After a few minutes my eyes adjusted enough to see a vague and weak shadow moving along on the ground. Well, really! I thought my shadow 100 yards away would be pretty vague, but not that vague.

What a brutally honest metaphor for most people's insignificance for their own era or the next! No wonder gravestones are made of granite.

This isn't a very cheerful thought to end a post on. But it didn't seem grim when it happened. I was pleased to find that small vague moving shadow. 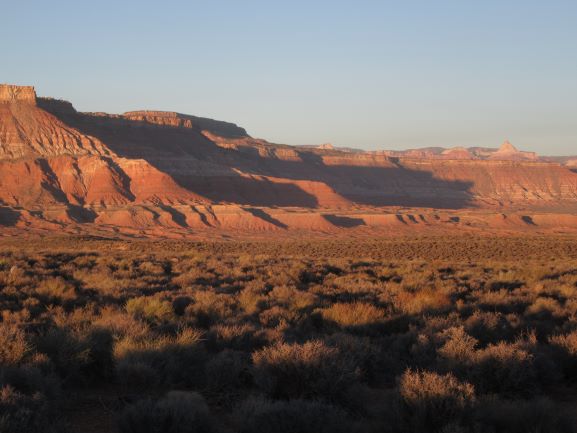