May 25, 2011
The month of May has found me as a professional tour guide, by my usual standards. Currently I am hosting the fourth RV-blogger visitor to the Little Pueblo. Quite early in the process I realized how difficult it is to be a good tour guide. My own interest in anything is primarily based on its experiential context, not on its purely visual appeal, and never on its appeal when looked at through a windshield. And say what they will, travelers tend to exist on a visual level more so than a resident.

Take, for example, a big hole in the ground. Its chances of being put on a calendar sold by the Sierra Club are not so good. But the terror I feel around old mine shafts makes it one of the most powerful experiences that I ever have in the great Outdoors.

I knew of a local legend, a steel net, that masked off a vertical mine shaft. It had taken two years to find it in the old mining area that stands over the Little Pueblo. During that two years, the idea of a bottomless mine shaft became my obsession.


When I finally found it, and faintly saw a pool of water thirty feet down into its sinister subterranean depths, I was disappointed. Recall your Burke, A Philosophical Enquiry into the Origin of our Ideas of the Sublime and Beautiful:


"Hardly any thing can strike the mind with its greatness, which does not make some sort of approach towards infinity; which nothing can do whilst we are able to perceive its bounds...

"A clear idea is therefore another name for a little idea."

This was later rephrased, perhaps unknowingly, by Thoreau:


"The most stupendous scenery ceases to be sublime when it becomes distinct, or in other words, limited, and the imagination is no longer encouraged to exaggerate it.

At any rate it was time to introduce the wunderkind of travel, Glenn of toSimplify.net, to the Net of Doom. Of course when you are a civilized host, the pleasures of the guest supercede all selfish considerations. So I let Glenn go out and play on the Net, first, while I played photographer.

The net seemed solid enough; at least in most places. Besides, Glenn is pretty light, so I wasn't too worried about it. 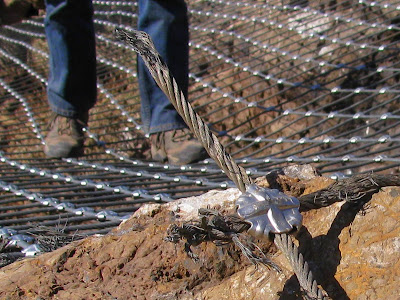 Most of the way out, our intrepid hero lay down to face the Abyss and asked 'Why?', or at least 'Why me?'

I guess we've all felt like that from time to time.

But say, what's this? Was he falling into the hubris of youth? Maybe this is all more Malevolent than he first supposed. His doppelganger is slipping, no, being pulled into the Abyss: 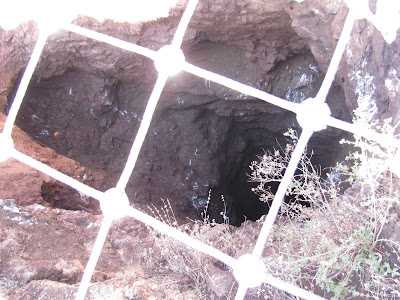 Sigh. And the lad had such great promise. It's a loss to the blogosphere. Thank goodness I had the foresight to have him sign a waiver before we got started, and sign over his Chinook (and cat) to me for safe keeping.

Unknown said…
Guess the Chinook is more your my style rather than the Wandrin Wagon. That would explain why when I visited I wasn't led to this acrophobic destination.
May 25, 2011 at 7:55 PM

Unknown said…
It's good that only my doppelganger fell into the deep unknown, for the [mighty] Chinook is far too plush for a man of your anti-sybaritic leanings! And besides, Ms. Emily would tear those two puppies of yours to shreds.
May 25, 2011 at 10:09 PM