The Cattle Rustler of Q.t. Cañón

(Almost Lake Mead.)  The Little Cute One sure loved our walk through the canyon system.  She was off-leash so she could practice her cliff-climbing skills.

Apparently there has been a generational improvement in the RV demographic.  Years ago I never saw anyone walking through the canyon.  RVers just sat in their rigs all day and did whatever they did. But now there seems to be more hikers.  Maybe that was the explanation for the rock cairns on our walking route.  (I dismantled most of them.)

(A rant against rock arrangements by snowbirds has been redacted...)

Anyway we walked upstream in the bottom of the canyon.  There seemed to be a lot of erosion left over from summer, I guess.  I even saw hoof-prints and cow poop, evidence of more vegetation than usual.  Finally we startled a cow and a steer, who came running towards me, as I hurriedly snapped Q.t.π back on her leash.

As it turned out, an eBike was coming downstream, and it was he that frightened the cattle.  That is the first time I have ever seen anybody else bike in the canyon.  We chatted for awhile.  As he headed off I warned him that if I saw him return with a rope around one of the cattle's neck, I would have to report him as a cattle rustler.

He laughed and said that, "Considering the price of meat at the grocery store, cattle rustling might make some sense..."

I agreed and said, "Yea, if the cattle laid eggs I might be tempted to do some rustling." ($5/dozen, locally.) 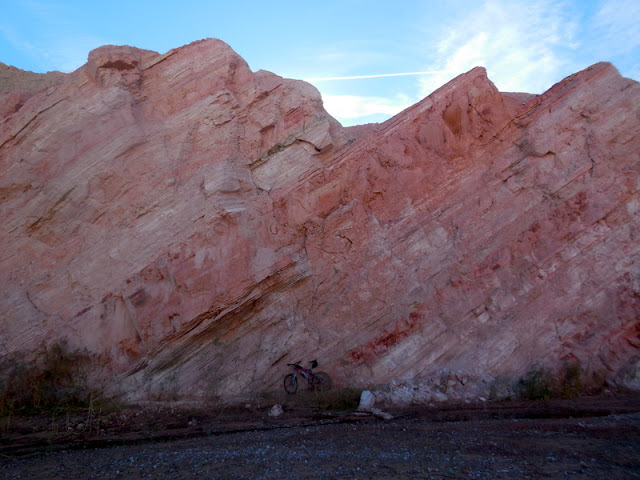