The Neighborhood Comes to Visit

The best travelers in the world are those who can meet people with interesting lives and talk to them. It must help to have an irrepressibly jovial disposition, be non-threatening, and have the right physical appearance and age.

But even if these things aren't perfect, you still get a chance to meet the neighbors, every now and then. First it was the cows and their calves. Then "Hondo" paid call. That really was his name! What a great name for a real Western ranch dog, a workin' dog. 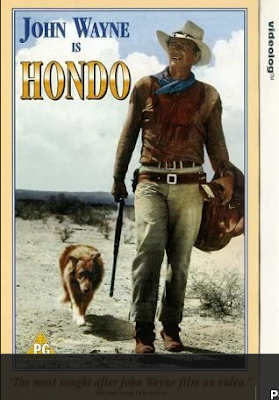 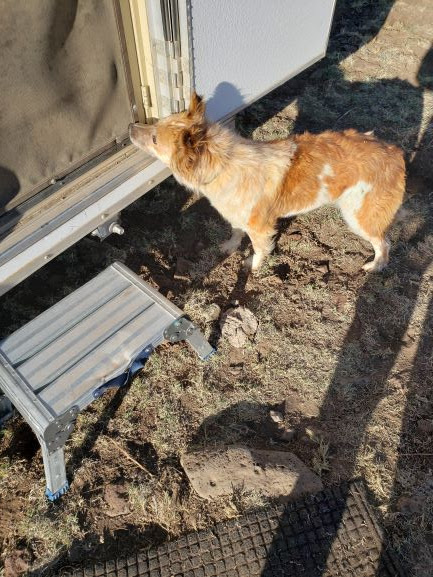 What a lifestyle Hondo must have! But it isn't all fun and games. He has 75 cows to fuss over. Of course he doesn't have to do it all alone. He delegates a certain amount of the workload to his human partner, who drives the ATV. She is recovering from shoulder surgery -- otherwise she would be driving her horse.

Hondo even delegated a certain amount of work to me: he assigned me the job of checking on cows and their calves at a local wallow hole. The bottom is glutinous mud, and they can sometimes get stuck and die in there.

I was eager to do my chore. Of course my horse is a mountain bike. It turned out that nobody was stuck in the wallow hole. I was ridin' pretty tall in the saddle after that mission was accomplished. After all I had earned my spurs and was now a "top hand" at a real New Mexican ranch.

Later that day, Hondo's sidekick asked me to move my trailer because I was blocking the way to the corral. They were having a roundup the next morning at 530. They wanted the cows to move to an area where the mesquite trees would soon be leafing out. Did you know that cows ate stuff like that?

It would have been nice to ask the rancher more questions without sounding like a nuisance and an ignorant city slicker. When we buy hamburger at the grocery store, aren't we eating steers most of the time? A cow seems too valuable to turn into hamburger, but a steer is good for nothing else.

The rancher's main problem was water. Every couple days they had to haul it up there from their well at the ranch house. That poor pickup truck!

If some people get their way with draconian lifestyle restrictions on the Little People, I wonder how vegetarians and vegans will be affected. Their lifestyles are hardly carbon-neutral since it is all based on dragging plant food around for thousands of miles, most of the year. Local plants are only edible for a couple weeks a year. Well no, there are grains, beans, potatoes, squash, and root vegetables.

So much of planet Earth is as agriculturally useless as New Mexico: parched, rocky, soil-less, hot, cold, and wind-blown. And yet, herding animals can turn that worthless land into food that humans can eat -- at any time of the year. And you think the internet was an earth-shaking invention? What about animal husbandry?!

Hondo agrees with everything I just said.