A Cello at Apache Creek

A day has to be a good day in Arizona if there was 0.10" of precipitation over night. We even had the slightest touch of snow flurries -- and it is almost May!

The ground was definitely damp in the morning, and the imagination could puff up some spots into a puddle. The residual moisture in the air made for euphonious puffy clouds in the normally-monotonous blueness. It is hard to be "blue" on an Arizona day like this.

And I must surrender to this. The morning and evening walks with my older dog are turning from andantes to allegros, but under conditions so fine, allegro need only mean slow and beautiful.

It was project day: time to add another solar panel to the roof. After brainstorming with another RVer, this approach seemed the least complex and expensive way to camp in deeper shade this summer, despite it sounding ironic.

With untinted glasses on, I felt woozy standing on a ladder and looking at the ghastly Arizona sun bouncing off the white roof. And scaling up and down the ladder. All it took was a few minutes inside the dark trailer, lots of water, and... what else?

For some reason I chose some baroque music by Boccherini. You might remember the finale of the movie, "Master and Commander." Let this You Tube video refresh your memory. I seldom play music loud enough to walk around outside and do things.

It was only hot on the roof. On the ground it was breezy and cool. The sacred shade was advancing from a ponderosa tree. Soon I might need a jacket.

The project involved mostly drill and screwdriver work, made a little easier by a convenient stump that was chainsawed off completely flat. Quite a nice worktable! I put a sharper blade into the hacksaw, and tweeked the thumbscrew that tightens the hacksaw to the proper tension. 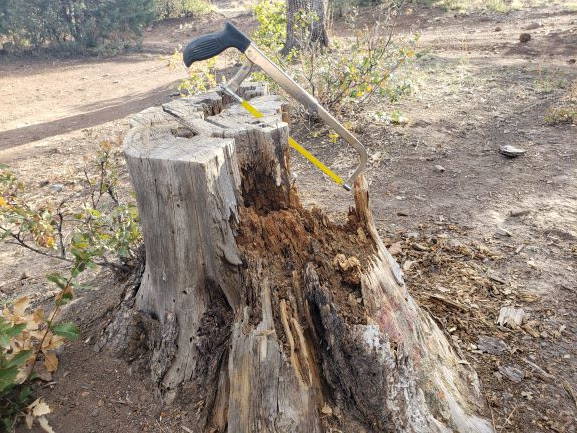 I had to grin, maybe even giggle a little, when thinking about the cello in Boccherini's music, and how stringed instruments always get tweeked the same way, prior to playing.

So what the hell? I cranked the music up louder -- there was only one other camper in the campground, and he was at the other end. Let Boccherini blast out into open space off the edge of the Mogollon Rim and down to the hell of lower Arizona.

Those who think visually might say that cliffs, or more generally boundaries between dissimilar landscapes, are fun because of contrast. But if we think acoustically, we might see a narrow boundary at the cliff as the perfect place for musical counterpoint: two separate melodies weaving around each other.

Baroque composers are said to be the masters of this musical style. In the outdoors, ravens seem to be the consummate artists at these windy cliff-lines.