Mountain Biking Towards An Un-named Piece of Music

It happened again. I wish it happened more often: an intersection between mountain biking and music.

Years ago I wrote about an experience like this on a despicable trail outside Madera Canyon, south of Tucson. But the unpleasantness of the trail created an appreciation for the mood of the music, which was ascending and gentle. (But, my goodness, I was long-winded back then!) The music by itself was enjoyable -- but it really was the synergy between the biking experience and the music that was magical.

In a sense, then, someone with no musical talent or training can become a type of composer, by combining the music with other parts of their life.

A few months ago I heard a solo piano work 'played' (aka, acted) by the 'lady of the house' in a classic TV western of all things. IMDB wouldn't divulge the identity of the music, but it sounded like Schumann or Brahms. I kept searching.

...but with what? It's not as if you could hum it to the internet search engine, and voila!, the song pops up on the screen from Amazon.

What else could I search? The piano piece seemed like a relatively popular classic piece, but not popular enough to be easy to find on some album like "Top Ten Classical Piano Hits."

What about You Tube? They have quite a bit of music available for free, although I don't know why. There isn't anything to see when somebody plays a piano, unless you were one of the ladies in the mid-1800s swooning over Franz Lizst on the stage.

The name of a certain piece was suspicious, perhaps because the History of English podcast has taught me enough Old English (aka, Anglo-Saxon) that I can fake the meaning out of some modern German.

What does this have to do with mountain biking? Searching for this music seemed so much like searching for a possible gap through the mountains; when I realized that, I almost laughed out loud.  It was good encouragement to keep mountain biking in a certain style: choosing a slightly known route, with no guarantee of success, and without looking up the answer on some damn smartphone app.

But what about the mood of the music itself? It doesn't jump out at you as being suggestive of mountain biking. Ah, but it does, if you are biking with an older dog. She still loves to bike with her man, although she is slower now. And since she is older there is a poignant -- but beautiful -- melancholy to the experience. But melancholy isn't really the right word. Call it an adagio for man, bike, dog, and desert. 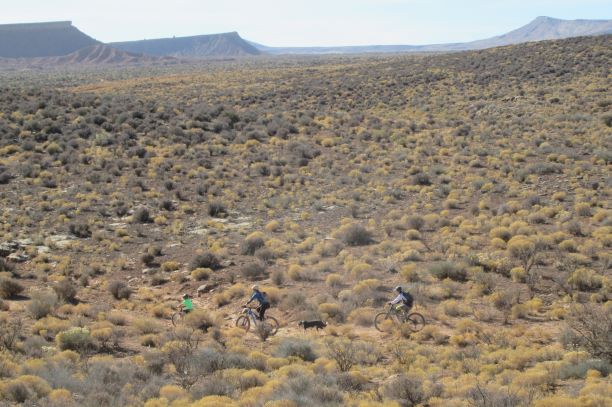