Finding a Thread in the Desert

Saturday is the official mountain biking sabbath, especially when the town is crowded with visitors because of one of its horsey events. Crowds of people mean too many motorsports people out on the dirt roads.

Fortunately it is possible to work around them by opting for a walk in the arroyos (dry washes) on the weekend. It is always gratifying to turn a disadvantage into an advantage. Of course I could buy a fat bike and see if it can handle the loose gravel in the arroyos.

For years I have wondered why it helps so much to go on an outing right from the camper's door, instead of driving to a trailhead. Perhaps driving to an outing makes me feel too much like a tourist, instead of a camper who has insinuated himself into the outdoor world.

At any rate, my dog and I walked -- I never "hike" -- to the nearest arroyo. Would it be wide enough to avoid thorns from overhanging mesquite trees? Just barely. But it can only get wider as it proceeds downstream.

I felt a little foolish proceeding downstream. One should always walk upstream in an arroyo system; that way you needn't memorize which fork to take on the return trip, since you will always return to the same spot.

A comb works so well to flick off the segments of teddy bear cholla that were magnetically attracted to my dog's feet. At least there was some early morning shade in the arroyo, so it was delightfully chilly.

The arroyo did in fact head in the right direction; I wanted to find an interesting canyon seen on the drive out from town. Maybe it wouldn't even matter which tributary I chose, since they would soon conjoin to produce the water flow needed to dig out the canyon, in question. At any rate I refused to look at Google Maps!

Soon I started seeing large boulders in the middle of the arroyo, instead of mere gravel. And the anticipation started to build. There was a tiny bit of the crescendo felt by the first native American canoeist, paddling down the upper Niagara river! 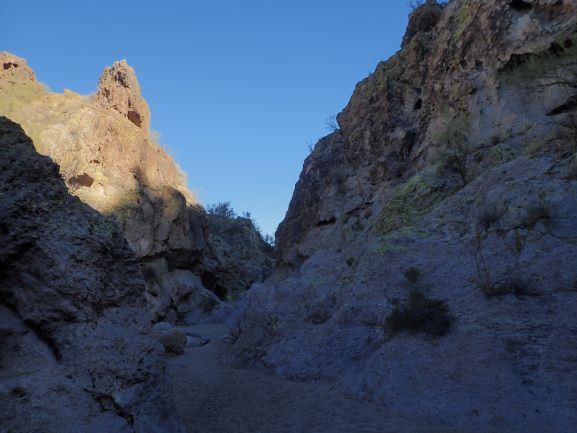 Although the canyon touched the main road, and motorsports people were parked at the intersection, the canyon was impassable to ATVs and side-by-sides. So I had given them the slip. Hah!

This was a walk that Thoreau might have approved of, when he wrote his essay. Walking desert arroyos appeals to me perhaps because they have thicker vegetation on their banks, and pretty rocks that are smooth and rounded. Think of the dog's paws!

More than that, an arroyo has a "purpose." It tells a story about water, the noblest substance in the desert. I can't lock on to a storyline like that on a hiking trail in the mountains. Ahh, now that is a point ol' Thoreau would agree with! 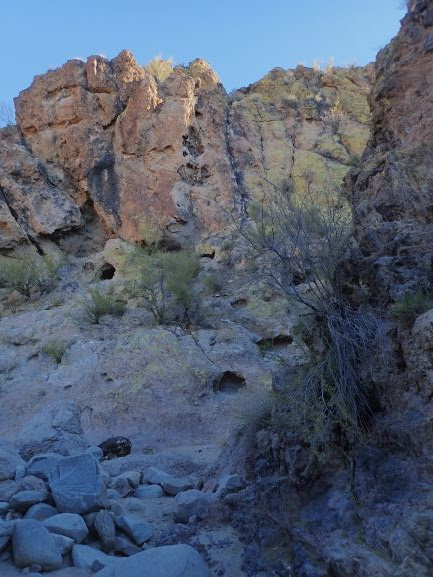 Brewed Journey said…
What's the difference between walking and hiking for you?

For me, walking is what I do to get to a utilitarian destination, irrespective of distance. I walk to my pole shed for a load of wood. I walk to the mailbox to retrieve the mail. I walk upstairs to get a beer. Hiking is for the pleasure of walking without any utilitarian focus. Hiking can be a saunter through a city or town. Hiking can be on trails or off-trail. At least, that's how it is for me.

There was a recent study on utilitarian vs. leisure walking.

My gut feeling goes against the study, but in the end, I walk/hike for leisure because it makes me feel better and clears my head, I walk to the mailbox to retrieve paper to start my woodstove.

Rick and Kathy Rousseau said…
Well said though I have never walked in the arroyos themselves have walked beside them looking down to find sometimes hidden treasures left behind by the unknowing. Also better to avoid the barbs of the cactus.
Be Safe and Enjoy!

kaBLOOnie Boonster said…
Brewed Journey, perhaps I should have used 'saunter' rather than hike or walk. At least that is what Thoreau would have done. Personally I don't do any utilitarian walking anymore -- other than the 4 steps from one end of my camper to the opposite end. That is why 'walking' means soul food for me and my dog.
January 17, 2021 at 10:54 AM

kaBLOOnie Boonster said…
Rick and Kathy, yes, arroyos are good for avoiding the nasty cactus and sharp rocks that you find "upland", that is, out of the arroyos. Some people are bothered by walking on soft loose gravel, but I am OK with it. And dogs love it -- it's like running on a beach to them.
January 17, 2021 at 10:58 AM