Worshiping the Smaller Gods of a Perfect Day

There are days when the goodies of life fall to you, like ripe fruit from trees. Yesterday was one of those days. Although the goodies were certainly noticed, something was holding me back from appreciating them to the fullest. But first, let's dwell on these goodies.

Autumn brings cooler nights and good sleeping weather. There is nothing like twisting and turning in bed for a couple summer months to revive your appreciation of "Hypnos" or "Morpheus", the classical gods of sleep and dreams.

On a mountain bike ride I enjoyed dirt on the trail, instead of the usual rubble. Enough rides in the Southwest or in Colorado will make it easy for a rider to see dirt as one of the best and  most under-rated things in nature.

Mid-day is still too warm and sunny. My dog had no difficulty worshiping "Santa Sombra" after the ride. 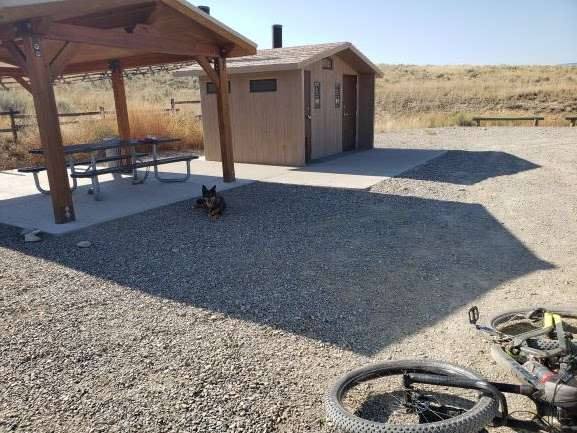 I like how the pavilion throws a shadow with a pointed church steeple on the right side of the photo.

The immediate foreground of the ride was typical ugly western brownness. But the background was great, on both sides. There should have been a Greek god of "Contrast."

By now I was good and sweaty. It had been a few days since I took a shower, so that was next. It was heavenly, as always.

So what keeps us from rhapsodizing about Life's and Nature's goodies as much as we want to? Think about how a dog shows such great gusto in enjoying a ride, food and water, or some attention from a human. Why aren't we more like that?

On a long term scale, culture and civilization made a terrible mistake when it abandoned the nature-gods of classical paganism and adopted Abrahamic religions, with their puffed-up, over-weening, remote, and omnipotent god.

A god of that type does not fit the finiteness of human life. If a human wants to live happily they must aim at real and finite goodies, like a dog lapping noisily at the water in its bowl.

Even though Western Civilization is in its post-Christian phase, this terrible idea of worshiping the remote and open-ended and unattainable persists in romanticism, egoism and ambition, the quagmire of consumerism, and even tourism.

In "The Discovery of the Mind: The Greek Origins of European Thought" Bruno Snell says that at the time of Homer, men believed that it was the gods who placed thoughts in their heads. Just the opposite of later philosophers talk of personal Will...ad nauseam.

It was Socrates who began asking questions and so it is Socrates that either gets the credit or the blame for moving us out of the consciousness where we were one with the gods and nature and pushing us into what we are now.....believing we are separate and the masters of nature.

There is a really great piece of fiction called "Fifteen Dogs" by Andre Alexis. Hermes and Apollo bet on what would happen if they gave dogs human consciousness. It's a page turner but make sure you have plenty of kleenex.

kaBLOOnie Boonster said…
Thanks for the recommendations, George. I am trying to get free previews, at the very least. Kobo has the Snell book listed as a free book, but I can't get it to download.
September 14, 2020 at 6:24 AM

You might try getting that book by Snell from Archive.org -- https://archive.org/details/discoveryofmindg00sneluoft
September 14, 2020 at 9:56 AM

kaBLOOnie Boonster said…
Ed, you have gotten quite a bit of good out of Arhive.org . Whenever I try to use it, I am distracted by the poor visual quality, coming from their optical scanning. But maybe you have to consider the "price" and just tolerate it.
September 14, 2020 at 3:26 PM

Ed said…
You are right, some of what I have downloaded from archive.org has been terrible OCR scans. But you never know until to download the book and see. I would say that 75% of what I have downloaded from them has been readable with maybe 40% being very good. There is also the 'price' to be considered as you pointed out.
September 14, 2020 at 6:02 PM