Picking Up a Town's Vibes

Challis, ID. I drove across Idaho yesterday and saw liquid water flowing through the dry washes (arroyos) the entire way. What is an ex-Southwesterner to think! How can such a situation be "natural."

I saw the Sawtooth Mountains for the first time. They were impressive but I know enough about the tourism industry to drive through as quickly as possible.

To the north and east, while still following the mighty Salmon River, the land became harshly lunar (that is, like the Southwest.) But I was still over 5000 feet high, and it wasn't that hot. Does this area sit in a rain shadow of the Sawtooth Mountains?

For the first time in a long time, I experienced "vibes" in a town. I am rendezvousing with a coastal critter who uses that term. Perhaps I need to consult the Urban Dictionary. But I have never gone into a Feed & Tack, True Value hardware, or grocery store and asked to buy 3 pounds of "vibes." I don't even know what aisle they are in.

The first thing I noticed was that nobody was wearing a face diaper. But there are a fair number of the un-diapered in Idaho.

Downtown there was a city park with the most luscious green trees. Sombra, Santa Sombra, in my pseudo-Spanish slang. I sat down at one of the picnic tables with my dog, and just sucked all that shade down. You'd think that there would be nasty anti-dog signs posted, but no, there were several dogs disporting in the cool shade.

But I wanted to push my luck. Do you think they might actually have an unlocked water spigot near the picnic tables? When was the last time you saw a water spigot in a city park? 30 years ago?

Anyway, I did find one. By now I was almost swooning. What's next? If I went to the gas station, would a little man in a company uniform rush and clean my windshield and then ask, "Would you like me to check your oil, sir?"

I felt more calmly euphoric in that city park than anywhere else I can remember. The other place that has delicious green city parks is Utah. Is the common denominator of Challis ID and Utah, a Mormon heritage? Or is it the hot, harsh, rocky landscape? 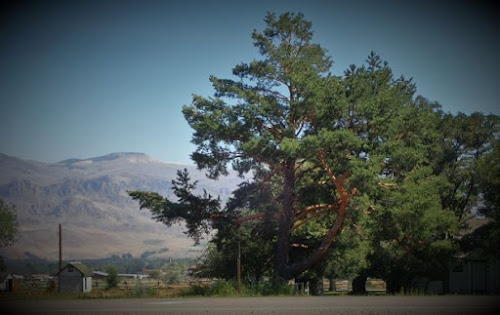 It would be interesting to learn about the history of the Arabs just before Mohammed. They were polytheistic pagans, weren't they? If they worshipped a goddess of the Oasis, why wouldn't that have been unbeatably emotionally satisfying, so why did they need a new religion?

Yes, the town does have a Mormon heritage. While I was there asking questions I found that 72% of the population is affiliated with the Mormon church.

I also found that if you need medical care you are a long way from a doctor. They did have a fly-in doctor once a month at the Clinic.

I wrote at the time: A Google Search found that there are no individual doctors practicing here in Challis, and I think the Center [Clinic] has only a Physicians Assistant on permanent staff. There are five lawyers however not counting the County Attorney. Which reminded me of the joke: A small town that cannot support one lawyer can always support two.
September 5, 2020 at 7:02 PM