It is quite something how most things in a new town don't really matter to a traveler. But when the eye -- or rather, the mind -- finds something that does matter, it really gets noticed.

Take water, for example. Oceans, lakes, waterfalls, and rivers all have their fan clubs. But it is only rivers that actually matter to me. I think the reader can explain this without any help from me.

The local river, the Salmon, is doing its best to please. The other day I saw a couple of ducks floating downstream. The current is fast despite it being the low-water season. The "quackers" seemed to be playing with the current. Normally ducks don't seem very interesting to me, despite their interesting colors and patterns.

But these two ducks caused me to give a pleasing sigh, out loud. Why so? Does wildlife need to be doing something to be interesting?

Well, it certainly helps. Playfulness is one of those things. And it makes sense that a creature seems closer to us -- and better at tempting us to anthropomorphize -- when it is doing something that seems volitional, rather than merely programmed in, biologically.

The town of Salmon has an island park in the river that serves as a dog park. I don't think the local dogs know how lucky they are. And yet the labradors were not jumping in the river. Maybe the current was just too fast.

On the other side of the river there was a knotted rope tied to a tree branch that overhung the river. When was the last time you saw one of those? It was waiting for a child out of a Norman Rockwell painting to demonstrate it.

Later in the day we were parked on some BLM land. After finishing a mountain bike ride, we dropped in on our neighbors: a club of (RC) radio-controlled flyers. I've never actually studied this sub-cult before, but usually, when you are in a receptive mood, watching humans play is a worthwhile thing to do.

Of course I had a thousand questions. 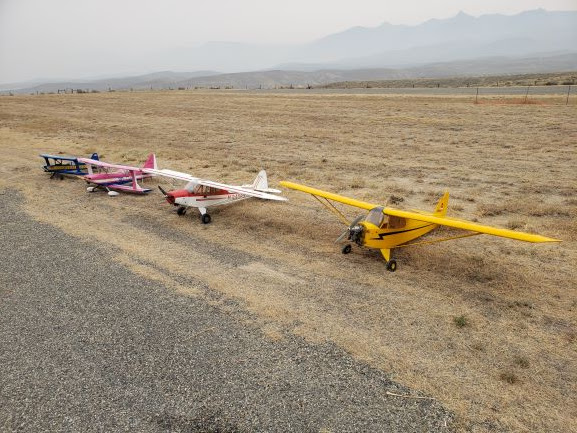 The "pilots" certainly had skill, I think. But I don't know how much of model plane's operation is being handled automatically and electronically. I would guess it takes a lot more skill to operate RC Flyers than the more modern drones you would buy from Amazon these days.

I like how the planes are mechanically naked: you see the cables coming back to move the flaps. You can easily visualize how moving a certain flap in a certain direction causes the plane to move in the desired direction.

You see the aerofoil contours and the lightweight triangular structures: 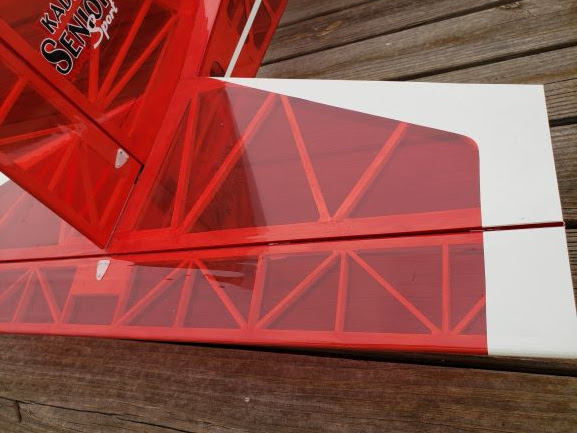 There was even one unusual flyer that didn't have a curved aerofoil as such. It was essentially a flying wedge that could take off and land on water. When landing, it tilts upward like a duck landing on water.

Did you know that these guys have "combat" competitions? I was having trouble visualizing little machine guns mounted on model airplanes so they could have World War I style dogfights. But actually what they do is tie a streamer to the tail of each plane, and then other planes try to cut the streamer with their propeller blade.

The air was clearing up on the tops of the Bitterroot Mountains, after three days of bad air quality. Seeing these model planes take off, with the mountains in the background, reminded me of the scene at the beginning of "The Blue Max" (George Peppard, James Mason, Ursula Andress), when the old biplanes lifted off, and Jerry Goldsmith's musical score soars. I started looking around for Ursula Andress to walk out of one of the nearby cargo trailers.