December 15, 2011
It is very satisfying to rise to the challenge of walking in generic (non-national-park) deserts and finding things that interest you. You have to use every angle that you can think of. You can't just be passive and expect the sheer optical pop-titude [*] of the place to wow you into a state of entertainment. (This is one of the False Doctrines of the Desert that some blogs preach. grin.) In the Wickenburg AZ area Coffee Girl and I went to work on the generic Sonoran desert landscape.

Imagining the topography as time lapse, accelerated photography is one of the great advantages of arid land, since geologic layers are exposed. Except for crumples in the earth and lava expulsions, much of the topography is formed subtractively -- that is, erosively -- from layers upon layers that have different erosion rates. 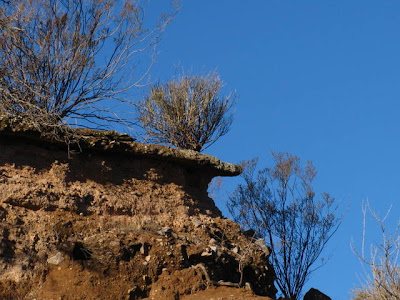 This caprock is only four inches thick; it overhangs about one foot. The mesa is only 20 feet over the lower lands adjacent to it. And yet this numerically humble caprock illustrates the process of topographic development as well as a bigger or prettier mesa would. "Process of development", rather than the supposed static perfection and holiness of the "cathedral of nature", is what nature is all about.


Soon a female kestrel flew overhead but I didn't have time to photograph her. Later, Coffee Girl responded to some bovines; she is a cattle dog after all. It's not difficult to distinguish her beef-bark from her more-serious coyote alarm and growl. She also is learning to leave cattle alone, at my command. But I let her take to the hills when she saw a deer buck.

What's this white-breasted bird, facing the warming morning sun?  It let me walk up almost to the foot of the saguaro cactus, one of the tallest in the area, perhaps 30 feet high! This reminds me of something. 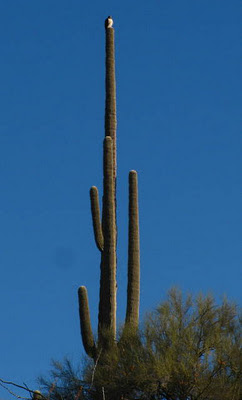 Perhaps in this raptor's earlier life it was one of the prophets of the Syrian or Egyptian desert; one of those ostentatious self-flagellants who was eventually canonized, men such as St. Anthony or St. Simeon Stylite (as in 'stylus'.) They were said to stand in their towers for years without ever coming down. 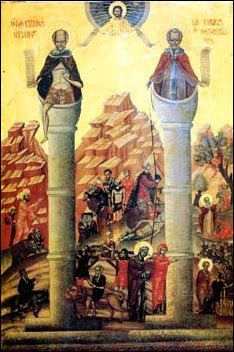 (from this Wikipedia article.)

At this time of the year there are many such wandering prophets of the desert in places such as Quartzsite or the Slabs. The original saints sometimes put their respective towers within talking distance of each other so they could argue theology. The modern desert saints are more likely to thrash through the polemics of Simplicity, frugality, mobility, generators versus solar panels, glass mat batteries versus flooded, etc.

The original Stylite, St. Simeon, is said to have held his ground -- or rather, his air -- for 39 years. Perhaps the modern desert saints are lucky that the BLM imposes a 14 day limit, when they must then...

Ted said…
The advantage of learning to appreciate common beauty is that it can only grow deeper. The "sights", on the other hand, lose their impact and, like sex and drugs, must have their dose increased (either a greater sight or more of them) lest interest be lost.

kaBLOOnie Boonster said…
Yes, the sex and drugs comparison is apt. Some people think I'm up in my own "tower", preaching about this too much. But somebody needs to "preach" a viewpoint that isn't aimed at vacationers or newbies, as 99.9% of the stuff on the internet is.

Appreciating common beauty could be called the Granny J Principle. She was good at that. Wish she was still with us.
December 17, 2011 at 4:49 AM