Doubts about the Human Race in Phoenix

December 24, 2011
People who aren't completely accustomed to airline travel sometimes feel affected by the big picture when they take off and leave the trivial earth-bound details behind, or rather, below. A calm perspicuity can set in at 35,000 feet. But at times perspicuity is troubling rather than calming.

In a famous scene in the classic film noir, The Third Man: Joseph Cotton and Orson Welles ride alone to the top of a Ferris Wheel type ride at an amusement park in post-World-War-II Vienna. The cynical and ego-centric Welles character stops the ride at its apogee where they can look down at small objects, people, crawling around on the surface of the earth a hundred feet below. He asks the Joseph Cotton character, 'Would he really mind if one of those ants stopped scurrying, because it died from the watered-down penicillin that Welles was smuggling in Vienna?'

It is thought-provoking, and yet troubling, to come in from a solitary camp in the desert and hit the outskirts of a monstrosity like Phoenix. 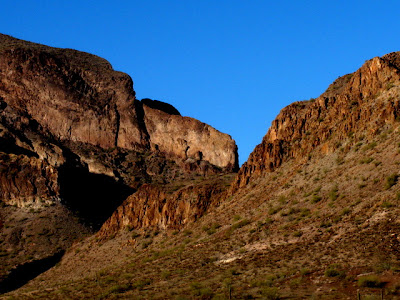 I choose a route that stays at the periphery where growth is most noticeable, as it is for trees. What a shame to see all that valuable agricultural land being turned into traffic-ensnarled highways, big box retailers and their even bigger parking lots, and lackluster housing subdivisions. The sense of loss was intensified since I had followed the Gila (HEE-lah) River down from its headlands in southwestern New Mexico, down to this remarkable floodplain called the Valley of the Sun.

At times like this I want to renounce my more-or-less libertarian political view and support a mandatory one-child policy, as in China. But such thoughts are soon pushed aside as being too ugly, as if the absence of such a program produces anything other than ugliness.

If you were to pull any of those frantic Christmas shoppers aside, and ask them why they are going through this madness, most individuals would smirk in agreement with you that the whole thing makes no sense. So then, why do they do it? The answer is of course 'because Everybody Else is and I must be like everybody else or I will be missing something'. Such is the control that the media has over the demos. And such is the folly of treating human individuals like they really are individuals, rather than as undifferentiated biological modules in an ant colony. If we renounce the idea that human Individuality has significance, then how do we justify Democracy?

Box Canyon Blogger said…
Bah Humbug mood, are we? Well, a good trip to the mall will either cure you or kill you. Now get out there and celebrate our traditions like a good little Boonie.
Merry Christmas Pal...
oops, I mean "Happy Holidays."
December 24, 2011 at 9:15 AM

Anonymous said…
Happy Holly-daze Boonie. Perhaps it's time to head over to Ah!-ho?

Thanks for the new word today - "perspicuity". However, it is not fair to use it more than once, you had me looking it up twice. HA HA

The answer is of course 'because Everybody Else is and I must be like everybody else or I will be missing something'.

kaBLOOnie Boonster said…
Ed, I'm glad you finally found a new word. I was beginning to have doubts about you after you claimed to already know the word, ululating.

That's a good question: if sheer tribal subservience makes people do what they do, well, that's fine; we're tribal animals. But why do they persist when it hurts to do it?!
December 25, 2011 at 2:57 PM