A Condensed View of a Rainy Desert

December 19, 2011
As the modern Brownie camera keeps getting better, will the electronic camera industry be a victim of its own success? Customers could become jaded enough to expect a technological marvel for $99, and then just shrug at it, almost with indifference. In fact that day is already upon us: the camera I use for this blog is the Canon SX110, purchased three years ago. Its successor, the SX130 was on sale at Walmart and Target for $99, as a loss leader presumably.

Camera technology is good enough; it's only the photographer that needs improvement. (Oh sure, there are utilitarians and mindless rat-racers who can't get enough megapixels, but they are just kidding themselves.)

It's sad enough to see the marvelous results of the camera industry taken for granted, but what about the nuanced skills of photographers, themselves? Will their viewers learn to shrug with indifference at superb photographs since everybody has an excellent camera these days, and if that isn't good enough, then photoshop it to death with software. Can't anybody do that? How much fun would the sternly virtuous art of girl-watching be if every woman went in to the cosmetologist, plastic surgeon, and high-end clothing store and spend unconscionable amounts of time and money on her appearance? Yawn.

Perhaps that's why I was admiring the Nikon 1 camera the other day. Although digital bits and bytes have an inexorable tendency to become uninteresting commodities, other things such as polished metal, glass, and interchangeable lenses maintain a certain mystique.

The solution to this commoditization and devaluing of photography is to develop a different sensitivity to beauty; a wider appreciation of the little things that are out there everywhere, under foot. Basically I'm preaching the Granny J Principle. I miss her.

I walked to downtown Wickenburg the other day after a couple days of rains in the Sonoran desert. I'd underestimated how interesting little things can be after a rain; for instance, rain drops hang on palo verde twigs like water balloons clinging to a barbed wire fence. And I forgot my camera! 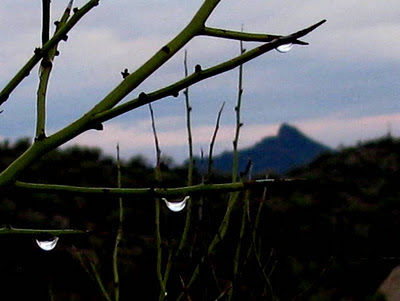 The next day Coffee Girl and I were out walking early in the morning. I saw bright, tiny glints of reflected sunlight hanging from a finely textured plant. It was delightful; they were like low-density Christmas tree lights despite a bright Arizona sky! But how could it be photographed? 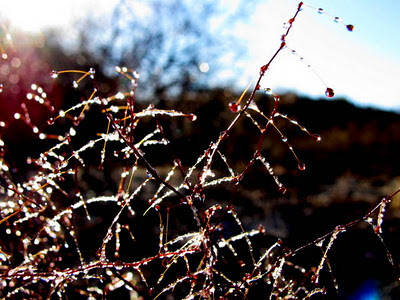 And then another night of rain in the desert, followed by another morning walk. The smell of a rainy desert is so distinctive. The twigs are oddly black from the rain. Astonishingly, a carpet of high density grass is popping up from the decomposed granite "soil".

What a violent contrast there is between pendulous drops of rain and the gnarly spiked twigs that they hang from and yet shouldn't.  Looking through the drop lets the hiker do what Lewis Carroll did with his Looking Glass. What would the Sonoran Desert look like if we could crawl into one of those drops, and pop out on the other side. What marvels might be found: centipedes and snakes, gila monsters and killer spiders. With enough imagination we could write it all up, and make it into a classic of children's books, except that nobody would believe it.

Potentially there was a whole new Sonoran Desert to imagine and then photograph. What kind of background would be best? Should the background be in focus or deliberately fuzzy; or should I just pretend that an out-of-focus background was my intention? (Would they buy that?) By now I was running around shaking with the camera.  Let's see now, how do I adjust the aperture stop? Oh crap, maybe I should just put it in Auto mode and hope for the best!

TomInBellaVista said…
With practice, your eye is improving. Keep it up Boonie.
December 20, 2011 at 9:34 AM

Anonymous said…
I think you should rename your blog: the artful occupation of independence! Very interesting and creative photos.
December 20, 2011 at 4:52 PM

Bob said…
Nice photos. I shoot with a Canon S3IS, a point & shoot. I don't consider myself that good, so I usually enhance my shots, at least a little. I feel if I'm going to post something it should look half way decent at least. As far as viewers being interested in buying photos, I think that would be a hard sell since the cameras are so good nowadays anyone can get a decent shot with a low to mid priced camera. I recently heard some cameras beep when you're in focus. I could use that with my aging eyesight.
December 20, 2011 at 5:53 PM

Box Canyon Photo-Blogger said…
It's fun to hear you wax poetic about the Art of Photography... considering your former distain for "eye candy."
December 21, 2011 at 11:30 AM