Back in the Bosque

November 19, 2011
Early settlers, be they from northeastern Asia or the Iberian peninsula or northwestern Europe, must have had an easy choice with river valleys like the Rio Grande. The soil is so rich and deep. And there are huge cottonwoods for shade. What a remarkable strip micro-climate it is! Sometimes the Chihuahuan desert starts only a stone's throw away. It is almost as bleak as the Mojave. (It's really only the Sonoran desert that can be rightfully accused of being pretty. But I do like the smell of sagebrush in the Great Basin desert.)

The cottonwoods get giddy in the bosque, the Spanish word that gets used a lot along the Rio Grande. (I need to buy a real dictionary with accurate etymologies. The online freebie I'm using says that the English word, bosk, which means the same thing as bosque in Spanish, comes from an Old Norse word that gave us the word, bush. I don't believe it. Bosk, bosque, and the French bois are too much alike.) 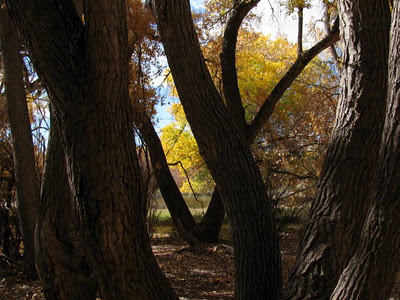 It is fun to visit the lower Gila or Rio Grande valleys and then read Toynbee's chapters on the civilization of the lower Nile or of Mesopotamia.