July 16, 2011
Downsizing is both a challenge and a source of great satisfaction. However, one must be careful not to get sucked into Asceticism. The travel blogosphere is full of Holy Prophets of the Desert (grin), who think that when they die they are going to Heaven to sitteth upon the right hand side of Thoreau or Gandhi.

For folks not in the market for pseudo-religious emotionalism disguised as philosophy, let's look at the Downsizing mantra from a rational viewpoint. The concept of Diminishing Returns is one of the most universal and true ideas in life. The first bit of Goodie X is wonderful; the next unit does you less good, and so forth, until you are getting less and less for each additional unit of time or money. 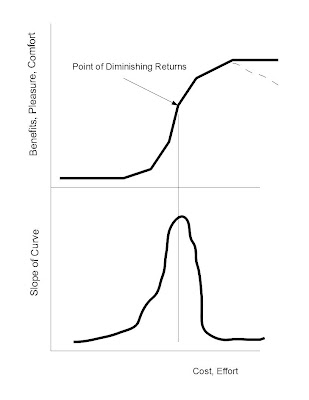 This is such a basic idea that just about everybody agrees with it. So why do we tend to forget it, or apply it so inconsistently? Why is a "normal" life set at a point to the far right on that graph?

Also, the graph shows why Downsizing (Simplicity, Minimalism, etc.) are inaccurate slogans: the Point of Diminishing Returns has the maximum slope. Therefore a real camper is a Maximalist/Optimalist rather than a Minimalist. Why does this bottom curve get such little emphasis?

We live in a post-Christian age. We've outgrown our religious traditions intellectually, but not emotionally. Most of the "new" secular ideologies since the Age of Enlightenment have just been reworkings of the main Judeo-Christian myths. Of course, the "new" ideology is dressed up in scientific garb so that it looks intellectually respectable. But underneath the facades they are just the same old rhythms, sung to different words.

Sometimes we just need to talk to somebody else to get us out of our mental rut. For instance many pseudo-campers make coffee in one of the standard Mr. Coffee type machines. These are high power devices that usually require an expensive inverter and generator. (We are only concerned with real camping, that is, without hookups.)

I knew an RVer who once owned a coffee shop in the Puget Sound area. I got a kick out of hearing him explain the chemistry of coffee: how different chemicals dissolve at different rates; thus the amount of time the hot water is in contact with the grounds affects the taste and caffeination of the coffee. He used one of those Italian jobs for making espresso on top of a stove. (No electricity required.) This seemed advantageous, so I did it thusly ever since.

(Isn't it odd how few retirees know anything of use to an independent lifestyle, despite spending decades in a respectable, well-paid profession. It's as if their usefulness was limited to the organizational niche they filled. Pull them away from their cubicle and they become uninformative as stand-alone individuals.)

But the other day I was showing this espresso maker to one of the Prophets (grin); just saying it out loud made me realize how undesirable it is to use several cups of water to clean a gadget that makes one cup of coffee.

So I went back to the old plastic cone with the paper filters; no water needed for clean up. But this time I forced myself to use another tablespoon of coffee grounds, or to pass it through twice. Lo and behold, I now like the taste of coffee made by the cone method. Why had I been in such a mental rut!? This trivial matter gave me enormous satisfaction as an example of living at the maximum of the lower curve, above.

Anonymous said…
nescafe makes some good instant, which I use to make my morning cuppa. If you can find a blend and the proper proportion of water to concentrate than you could save on the filters. The French Roast is fairly common in groceries and I also found Robust, but only once. I too have a bialetti, and only use it at home when I want to treat myself. Lots of work for that one cup.

Anonymous said…
"...It's as if their usefulness was limited to the organizational niche they filled..."

On the coffee front, I had the same realization with the french press in that clean up was water intensive. Agree with Tom, there are some pretty good instants out there now. Starbucks Via is really good but expensive. Just about any instant is tolerable with enough half-n-half. bethers
July 16, 2011 at 9:17 PM

kaBLOOnie Boonster said…
Tom, I haven't tried the modern version of instant coffee. In olden times, instant coffee almost made me sick. In any case, instant coffee might be on the far left side of the graph. Recall that I'm not minimizing for the sake of minimizing. The cone is at the point of diminishing returns.

bethers, it does seem as though any kitchen gadget -- no matter how fetching it looks on a TV commercial -- requires too much disassembly and cleaning to be practical for RV camping.

Michael said…
Isn't it about delivering the highly addictive caffeine to our system? For that reason I drink green tea. Tea bags in ziplock and hot water from something as simple as this:
http://www.youtube.com/watch?v=pajkt594Ruw
or from those orange levers on quickie mart coffee makers.