July 20, 2011
Chalk one up for audience participation. Recall that I wanted a convenient way to put air back in my tow vehicle's tires after letting half the air out, which is helpful in backcountry RV camping: no only does it make the ride more comfortable, but it keeps you from getting stuck.

I was out of date on 12 VDC tire inflators. Reader Tom (of Orlando) suggested the Slime brand tire inflator. So I went to Walmart and bought the Slime "Heavy Duty" Tire Inflator (about $55, bar code # 16281 00618, no slime included.)

When I opened the box I immediately began fluttering my eyelashes. It was love at first sight. You see, the problem with low power inflators is not so much the low power, but the cheesy valve connector that leaks the air out as fast as the inflator is trying to put it in.
That's because tire inflators and pumps of the world usually use these crappy friction grip valve connectors as in this photo: 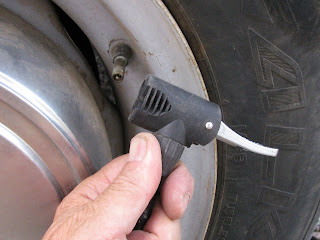 Flipping the lever tightens the rubber barrel around the (Schrader) tire valve. By some miracle it might work when it's new. But soon the rubber will age, and you'll leak air faster than you're putting it in.
In contrast, the Slime Heavy Duty Tire Inflator uses a screw-on metal valve connector/fitting. That's right folks, metal. 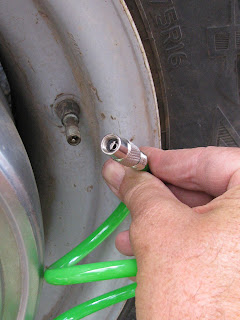 So it doesn't leak air. (By the way, bicyclists have had the same problem for years. There's only one company, Silca of Italy, that uses a screw-on brass valve fitting. I have had a Silca floor pump for 20 years. A local bicycle shop advised me to guard it with my life.)

First, the results with the tow vehicle, a full sized van: the cables and hoses were long enough to run between the "appliance receptacle" (the PC term for cigarette lighter) on the dashboard to the rear wheel. It inflated the tire from 38 to 52 psi in 5 minutes. The noise was acceptable.

Then I tried to do the same for the trailer tires. Naturally the cord and hose aren't long enough for the anti-door side, so I just popped the screen out of one of the windows, with a putty knife. The Inflator didn't work with one of the 12 VDC receptacles (cigarette lighter style) inside the trailer because it was too many splices downstream of the battery. I moved it over to be very close to the battery, and the Slime Heavy Duty Tire Inflator worked just fine.

The Inflator used 9 amps DC, which is 117 watts at 13 VDC. That's pretty powerful. At this amperage the connectors and receptacles get a bit warm, so keep an eye on that. The Inflator itself gets pretty warm too; that doesn't mean that the motor is ready to burn out; it might just be due to the fact that compressing air makes it hot.

Now if only reader Tom would improve some of his political views.

Anonymous said…
I can't take credit for the metal connector as my pump doesn't have it. Apparently a product upgrade. Hard to believe in this day and age that anyone would make a real improvement to their product. Hope it continues to work for you.

I'll do my best to improve my political views, thought I already had.

Alaina Middleton said…
The information provided in this blog is very useful and interesting to read.