Happy With So Little 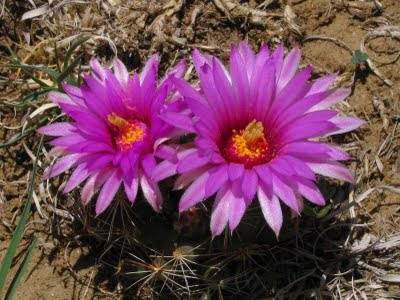 It's too early in the monsoon season in the Southwest to see flowers. Most of them are cautious and wait until September. These two were a real surprise. Keep in mind that there was a severe drought for nine months prior to this.

It's not good enough to just be pretty when you're in the flower biz. Something more dramatic and interesting is needed. First we must push away the Trivial and the Prittee-Poo, and dwell on the horribleness of the drought. We must be willing to stare into the Abyss. Some people won't do that because that would be "negative thinking." Too bad, because the real beauty isn't in the "positive", banal, and insipid color of flowers; it's in the violent contrast between Suffering and Rain.

It reminded me of RVing in Mexico. Sometimes I would sit out in the plaza and admire the pretty senoritas; schoolgirls actually. It surprised me that they were so attractive. But why? Must a country have material affluence to have pretty young women?

Carry that thought to extreme: imagine you are in a war zone, with destruction, cruelty, and suffering everywhere. Even there, girls turn into young women. And seeing them must make people think there really is a future.