What is the opposite of helio-therapy? I can't think of the right term. But whatever the term is, I have gotten it the last couple weeks.

It is a miracle cure. I thought that I was a terminal sun-hater, brown-hater, and a few other things. But three weeks as a human mushroom...

The photo credit goes to a fellow camper who was a mushroom hunter.  I have gotten a kick out of the mushroom hunters in the forest.  They take their hunt so seriously -- more seriously than most people would take gold-prospectin'.  They are even secretive about where they found their mushrooms, and told me that there were bear tracks in the area or a cougar sighting.  You could say that about any place in the western public lands, so why are they mentioning it!

This is a perfect example of how human beings can sometimes be seen at their best.  It's rare.  Can you think of more examples? Their "best" means doing something they love; something that takes skill and knowledge; something that is non-destructive, non-noisy, and non-expensive.

Isn't it nice to know that it isn't just cyoot witto fuzzy-wuzzy animals that can be charming and that our own species can seem like that at times? And when they are, who is more charming: people or a sunny, dry day? 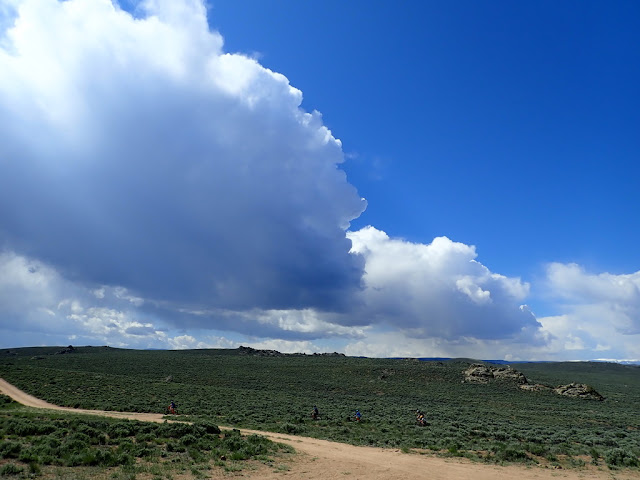 It is possible that someday a smartphone app may ruin the fun that mushroom-hunters are having today, in the same way that the internet has damaged camping.  I don't want to dwell on that, but it is worth appreciating what exists today even more because of it.

Ed said…
"I thought that I was a terminal sun-hater, brown-hater, and a few other things. But three weeks as a human mushroom...and I am cured!"

Your forgiven, we will welcome you back to the land where all the plants will puncture you as you dry out. Just be sure to fill your pockets with rocks to keep you from being blown away!
June 21, 2022 at 12:19 PM

kaBLOOnie Boonster said…
Ed, escaping high winds is another benefit of leaving the Southwest. Actually though, wind is more positive in the summer, since it cools you down and keeps the bugs away.