A Holiday "Parade" in the Desert Southwest

(This is a rant against motorsports in the desert. But first, a disclaimer: the vehicles themselves are quite versatile and lend themselves to use by mature and sane recreationalists, as well as farm and ranch work.  On mountain bike rides I frequently stop and have nice chats with such people.)

On this Thanksgiving weekend, the weather is perfect in the desert. The motor-crazed yahoos do not want to waste it. They were screaming by my campsite before the sun was up.

It is strange how they travel in large groups or convoys, with American flags sticking up. Maybe they think they are on some sort of para-military "adventure" and they need compatriots for safety. And do they really enjoy eating each other's dust?

But let's be fair: they could have been driving faster. I even imagined a slight politeness as they passed by. Some gave us a friendly wave. Did they really imagine that campers admire them or their machines?

But most of all I noticed and appreciated that they weren't playing raucous music as they passed by. It is fun to speculate on the future of the yahoo industry: will Federal regulations force them to buy electric side-by-side "RZRs"? If so, they will probably add hay-bale-sized loudspeakers to the machines for artificially making engine noise -- but wouldn't that drain the batteries too fast?

At sunset, it was time to announce "Mission Accomplished". The world-conquering heroes returned on the same road. A day of yahooing had spread them out a bit, compared to the morning convoy. The ramp of rubble coming down from the mountain range was hung over by a miasma of dust about 50 feet thick.

I can't explain anything that is happening in the world. Now that we are Building Back Better and going through the Great Reset -- empty strip malls, urban riots, double-digit inflation, and high-priced gasoline -- who are these people who can afford noisy machines that are fun, in a juvenile sort of way, for all of three minutes? 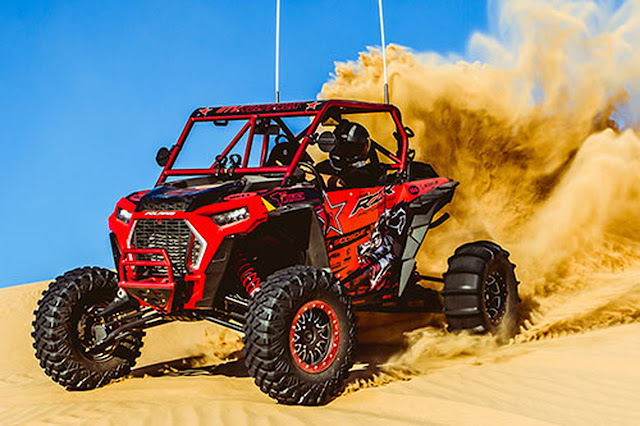 They must be government employees. Or maybe real estate agents.

Ed said…
"...who are these people who can afford noisy machines..."
I think you have probably identified the caste correctly. For those readers that do not know what the RZR models might cost I provide that for the advertised latest models (which are more powerful, so everyone must get one).

RZR Turbo R
Starting at $25,999 US MSRP
Plus destination charge and set-up.
Logistics surcharge of $400 will apply.