Arguing My Case on Courthouse Mountain

July 21, 2012
I hate to admit it but it would be nice to carry a smartphone with a flower, tree, or bird "app" when hiking in the mountains. As an alternative, hike with Bobbie. (Besides, she doesn't require batteries. She is a battery on the trail.) Seriously I'd rather just ask somebody a question than play with some distracting gadget. For instance, the shape of this flower was reminiscent of Indian paintbrush, but the color was wrong. She explained that Indian paintbrush does come in more than one color. 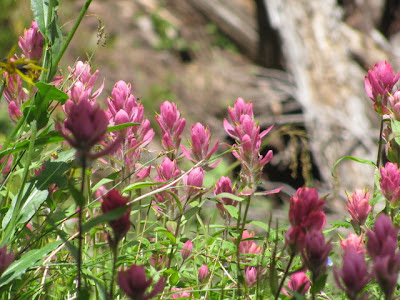 Mark and Bobbie complained about my wisecracks (on my blog) against eye candy, postcards, pretty-poo scenery worship, etc. It surprised me that I'd given offense. Perhaps they underestimate the difference between a part-time RVer (in vacation/tourist mode) and a full-time RVer who must expand his interests in other directions.

At any rate I was making a certain amount of progress mending my fences on the way up Courthouse Mountain, just past Chimney Rock where they shot the climactic scene in John Wayne's "True Grit", when there was a surprise and a setback: 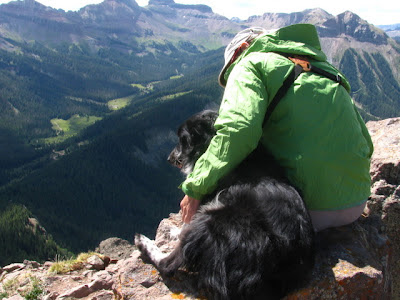 Gus, a friendly Australian shepherd, was resting at the top with his owners. Immediately I felt huge pangs of guilt that I hadn't brought my kelpie, Coffee Girl. While I circled around Gus and his doting owner and photographed them from every possible angle, while ignoring the world class scenery around us 360 degrees, Mark, Bobbie, and John Q could only roll their eyes at my foolishness.

But Gus wasn't the only animal star on top of Courthouse Mountain. There was an enterprising chipmunk, obviously an experienced shakedown artist. How he could make a living off of a couple hikers per day is beyond me: 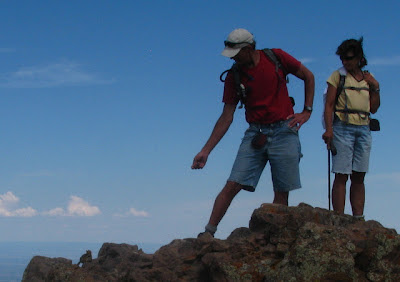 When I spot something that inspires me with its beauty, Mark and Bobbie seldom give me credit (sniffle). They would have you believe that the ultimate Ouray experience comes from driving far enough and hiking long enough to some special place whose beauty measures 8.1 on some sort of postcard-Richter scale. If you end up with a mere 7.9, you have missed your chance.

Folks, I'm here to tell ya it ain't so. For an RVer the ultimate aesthetic experience comes from going to the one and only laundromat in town; it's a real dive, despite Ouray being a rather upscale place. As an aesthetic exercise, give in to the scumminess of the place: dilapidated machines that rip you off, no phone number for a refund, dirty floors, and touristy-ripoff prices. And it's hot in there too! Outside, my dogs were possibly getting hot in the van -- Ouray can get a little toasty in early afternoon.

When you step out of that filthy laundromat you see monsoonal clouds pinching off the canyon. The clouds are scrubbing the canyon walls. Ahhh, the first cool afternoon shade hits Ouray. It's my favorite time of year and my favorite moment in Ouray. I suppose contrast is what we need to look for. 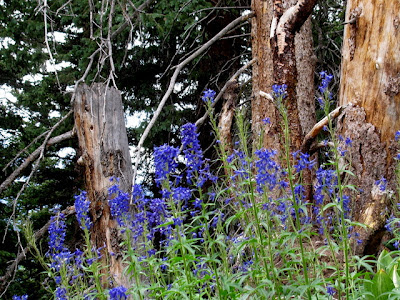 It doesn't cost a dime to contrast a beautiful thing -- not necessarily visual -- with a mood based on some prior experience of ugliness. And it can be done anywhere.

Box Canyon Blog.com said…
I get your drift, but sometimes... their is more "oil" to be had just a little deeper. So many, many times, if we hadn't pushed on to a summit, or a saddle (which I know you can appreciate), we miss the spotted fawn, or the Big Horn Sheep, or the Australian Shepherd. And what are days for, anyway? Who wants to sit around camp gazing into their 3 bars of Verizon :))
July 22, 2012 at 6:44 AM