July 24, 2012
Normally a dog is quite an asset on a hike or mountain bike ride; the human feeds off the dog's energy; it brings out our Inner Wild Child; it's as if the dog becomes an extension of our own nerve endings. But yesterday my dog turned out to be a nuisance. Although I don't have an inordinate fear of heights and cliffs, I freak out when my kelpie, Coffee Girl, gets too near the edge of vertiginous trails. So I abandoned the Ouray RVing and Hiking Team and descended Bear Creak trail.

Most of the way back down I heard crashing through the forest and saw a large brown body through the leaves and needles. I snapped Coffee Girl back on her leash so she wouldn't chase the deer-like animal on still dangerous slopes. A half minute later this creature popped out on the trail: 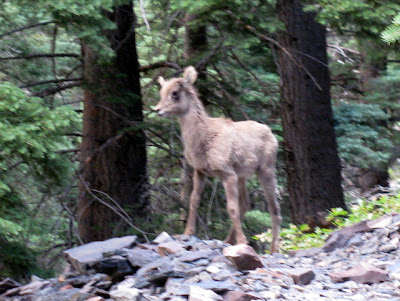 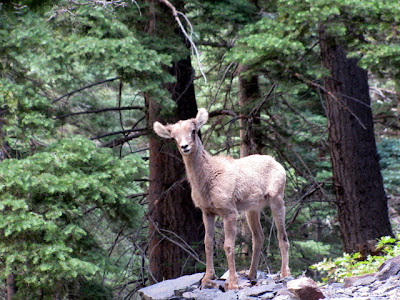 My initial reaction was that this was the ugliest deer fawn that I've ever seen. It was pretty small; maybe hip high or so. It stood above us on the trail and looked right at us. It would take a couple tentative steps towards us and do a sheep-like baaa-aaa-aaa, and then pause. It repeated this a couple times.

We've all gotten in the habit of saying 'Google it' or 'look it up on Wikipedia' to any question these days. But I didn't have any luck in hearing recordings of the sounds that baby ruminants make. So unless a reader knows better I'll conclude that Junior was a bighorn sheep who got separated from momma.

A minute later a family of humans came hiking up the trail, with several young girls in the party. Their faces showed how upset they were about Junior's chances: they said it was being chased by a 'large fox' lower down the trail. A coyote is far more likely, but I'm not going to launch into one of my favorite stump speeches about city-slickers. It was just too precious to read the girls' faces and see their pained concern for Junior. 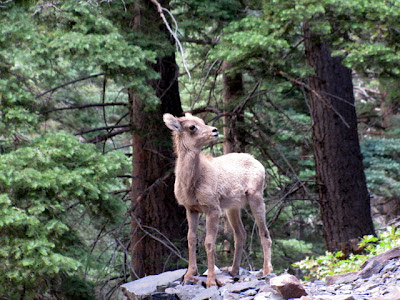 Box Canyon Blog.com said…
Those are great shots, Boonie!!!
Very Cool how turning back crossed you with something special.
July 25, 2012 at 8:04 AM