Slovenly Campers from the Big City

March 17, 2012
How many place in the world are clean, and why are they so? I'd like to ask an experienced world traveler about that. My guess is that Japan and northern/Germanic Europe (and her colonies) are clean, while most of the world stomps around in its own litter and excrement.

Consider this attempt at philosophizing to be an exercise in "anger management". I am camped outside a (fee-ed and over-managed) recreational area run by the forest service. Essentially it is a "metro park" for the ghastly conurbation of Tucson. Since my boondocking area is outside the "high rent" district, it is free 14-day camping, although the campsites are numbered. There is no campground host and no facilities. I've been here almost a week and haven't seen a ranger yet. It almost seemed too good to be true. And you know what they say about that...

After about a week of complete solitude some yahoos came in to camp on the weekend. You should see how the slobs leave their campsites: 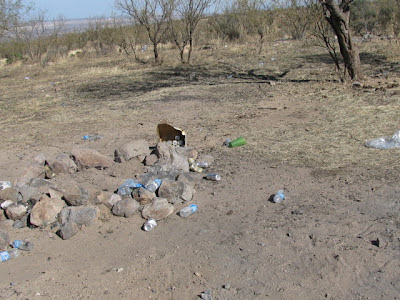 These slobs might have left in a hurry due to the high winds last night; notice the half-case of abandoned, unopened beer in the cardboard box. Other campers have left old car batteries. Since many of these campers are car-campers and tent campers with young children, there is a lot of toilet paper blowing around. It truly amazes a non-parent like me to see how much paper and plastic crap is needed to support a litter of human puppies.

The first interloper to disturb my solitude chose the adjacent site of course -- so I would benefit from the sub-woofers on his car, presumably. They were high-achievers, leaving not only a still-smoldering campfire (in a windy area surrounded by dry grass), but a large pile of human excrement a few feet from the fire. (It was a calm morning, but I returned to their site and doused the fire with water.)

Now, one way to look at this is that I'm just a vile racist who is looking at things from a (northern Protestant) Eurocentric, repressed, old-fashioned point of view. Mexico, like most third world countries, is content being filthy; what we still call "the USA" is really just northern Mexico; therefore 'when in Rome...'

Or maybe the campers were low-end-of-the-bell-curve whites with an Appalachian culture. Have you ever traveled through the mountains of Kentucky and Tennessee and seen all the debris and litter?

Or maybe the campers looked at the cow plops every 20 feet and thought that it was pointless to be meticulous with litter if the place is already over-run with "pollution". I consider it a positive thing to have cattle grazing on public lands, as long as they're aren't over-grazing it. It is proof that the "multiple use" policy of managing public lands has not yet been completely killed by vegetarian Greens from big cities in California. Why are cow plops pollution, anyway? Their feces is just rendered grass, and I love grasslands. Animal feces is simply a part of nature -- but don't tell that to the squeamish, college-educated suburbanites visiting the "high rent" district of this park area.

How is a libertarian to feel about a situation like this? Bad, I guess. "Freedom" to a lot of people just means the opportunity to destroy with impunity; to make as much noise as possible; to leave filth or smoldering campfires; and to destroy land with ruts and motor vehicles. People abusing their freedom just gives the Regulatory State an excuse to ratchet a click or two closer to its dream of totalitarian maternalism. 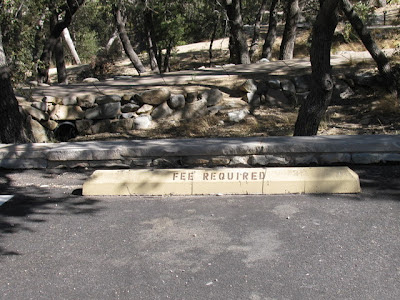 rvsue said…
It's rare that I agree with your opinions, boonie. So rare that I have to make a comment here and savor the moment.

Time and again I'm stunned at the ghastly behavior of people. Right now I'm alone in the desert (Yay!) Except yesterday . . . I saw a car and some people far off. This morning I hike to one of my favorite places and, sure enough, there's a styrofoam cup! They weren't here more than an hour.

Good job describing the behavior of slobs. Too bad you're preaching to the choir,eh? The grandma in me makes me want to grab those people, walk them over to their mess, and say, "Clean it up!" There! I feel better.
March 17, 2012 at 12:25 PM

kaBLOOnie Boonster said…
rvsue, if you're that honked off over one styrofoam cup, you would go crazy here, where they leave a small kitchen waste can-sized donation for the next camper. (This depends on how you do your accounting. Personally I think baby-plops should count twice on a per pound basis.)

Glenn, (eyes rolling) Yea, and what sort of corporate zymological "rejectimenta" do you think this demographic would leave? A high end microbrew from Fort Collins or Missoula?

butterbean carpenter said…
Howdy Boonie,
The Bayfield Bunch would've picked up the litter, buried the poop and drowned the fire with the beer, built a new fire for the next camper and felt good about it.. Al's just like that!!!
Yeah, as long as you're in CA you'll have to put up with the a..h...s in
the 4th world; even if you're in AZ.
Take deep breaths and calm down!!!
March 17, 2012 at 9:21 PM

John V said…
We just came back from a month travelling throughout New Zealand. It is a gorgeous place, but there are many sites in the US that are just as grand (if not more so). The big advantage of NZ is that there are so few people there. We were hiking alone most of the time. You hit the nail on the head. Too many people (or too many that don't seem to care) ruin a place. And there are too many people in the US.
March 18, 2012 at 1:39 PM

kaBLOOnie Boonster said…
John V, isn't it amazing how the most fundamental fact in the USA, overpopulation, is never talked about, even by environmentalists who used to make it a big issue?
March 18, 2012 at 2:46 PM

Bob said…
I can sympathize as I live in a high trash area. Four wheelers come from around the state to party locally and do they ever leave their trash behind. I guess there's no escaping it.
March 18, 2012 at 4:47 PM

Bob said…
Not sure about the "over populated" thing, although I tend to agree, but don't get me started on how I'd "thin the herd".
The reason I say that is, there is roughly a half a billion people here in Europe, and the thing that strikes a person coming from the "Colonies" is, just how neat and tidy everyone keeps things. THERE'S NO JUNK out in the countryside. Can't be said of rural New York, Pennsylvania or even Southern Ontario. These are the only examples I can think of where I've seen it. I'm sure you can think of more examples of "trashy" folk.
But hey, the "I can do whatever the hell I want" philosophy is alive and well in the Colonies.

I don't know what the answer is. Personally, I've found it somehow therapeutic to carry around a trash bag and pick it up. Sort of a "bend and stretch" kind of ritual. Somehow good for me, or that's what I tell myself.

Your mileage may vary.

Ed said…
You say: "here in Europe, and the thing that strikes a person coming from the "Colonies" is, just how neat and tidy everyone keeps things. THERE'S NO JUNK out in the countryside."
Bob, you need not travel to the Colonies to see trash and junk. You need to spend some time in Bulgaria, but you probably do not consider it part of Europe.
March 20, 2012 at 11:31 AM

"Finally, we have divorced ourselves almost completely from the natural world, and even more for respect for it. Once we were specks on the landscape. The mountains were vast and forbidding; one walked in them with a sense of awe, or at least of being small in a large place. You could lie beside a brook babbling through a forest and reflect that the world contained things other than the trivialities of human existence. This produced I think a tranquility that made for contemplation, a frame of mind conducive to what we call tiresomely “creativity.”

Now we are become a blight on the earth, with the tinker-toy minds of chemists, rushing about in noisy machines and leaving beer cans everywhere. I do not see how a Vivaldi or Corot or Milne can exist under such conditions. And they don’t."
March 20, 2012 at 5:21 PM