Cathedral of Nature Burns to the Ground

June 14, 2011
So the truck (of last episode) belonged to a non-profit corporation, did it? Why was that important enough to stick on the outside of the truck?

Environmentalism -- that is, Karl Marx meets Bambi -- is an easy belief system to make fun of, but I'm in statesman mode today. Let's just take their belief system as it is, and try to make it compatible with high quality forests, instead of the overgrown tinder boxes and spruce bark beetle feeding-grounds that most of the national forests are. Besides that, national forests are just plain ugly.

Do environmentalists really like these eye sores any more than the rest of us?
Or is their basically Marxist view of the logging industry getting in the way of a sane attitude towards logging forests? If so, would they stop opposing logging if it was run by the government?

After all, then everything would be done perfectly since the government sector doesn't have the evil motive of profit, like corporations do. The logging could be done at the right time, to the right degree, away from lakes, on flatter ground, with the slash cleaned up, etc. Fewer forest fires would mean fewer tons of hydrocarbons, carbon monoxide, and carbon dioxide spewed out into the air. (Of course since those molecules are natural, they might not be harmful like the same molecule if it came from an automobile.)

Oh sure, people like me don't want one more sector of the economy taken over by government; but since that sector has already been destroyed, what harm could the government do to it? It would be worth it to put these political issues aside if it meant healthy and beautiful forests.

The Little Pueblo isn't even downwind of the main Cathedral of Nature (the Wallow Fire), but the skies have gotten strange the last couple weeks just from smaller fires that get no publicity: 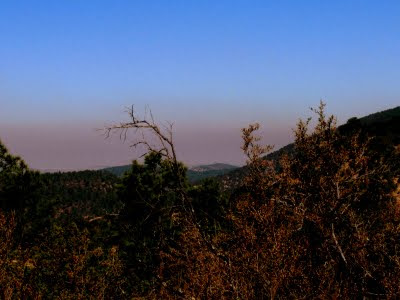 Ed said…
The environmentalists in this country care very little about the environment but do want control of it and those that utilize it.

There have been plenty of stories about what the Soviet Union did to their environment. I saw, up close and personal, what the Communist in Bulgaria did to theirs.
I also heard the stories from Bulgarians about how the Communist Elite virtually exterminated all the game animals in the country. They treated the wild game and forests of Bulgaria the same way the King and his men treated Sherwood Forest.
June 15, 2011 at 8:43 AM

Reminds me a time years ago when I was hiking through Rocky Mtn Natl Park and came to a high point over looking the forest across the valley below and up the other slope. That point was also a place where the cars could get within 100 feet of that view. Standing there, I was admiring the view when the man of the couple standing next to me said that was a lot of good lumber that was going to waste under government control. I looked at him thinking he might be joking. Nope. He was dead serious. Clear cut those trees -- all of them. They will grow back.

kaBLOOnie Boonster said…
Ed,I don't think the average Green professor in an American university would believe what you saw with your own eyes.

Wandrin, I'm not up to speed on forestry but I don't think you can perform selective logging on forests where the tree has nowhere to fall, because they are growing too close together.

The loggers need to cut the stumps close to the ground and round up and burn the slash or things look pretty ugly. Of course if they started logging 5 trees back from the road, nobody would see it anyway.

I see no difference between clearcutting a cornfield or wheatfield (where it's called harvesting the field) and clearcutting a forest (where it's called raping the forest). What is so sacred about a bunch of stupid pine trees? Growing wood is just another type of agriculture. The only difference is that suburbanites from big cities subscribe to the Bambi principle.
June 16, 2011 at 5:04 AM

Unknown said…
Regarding selective logging... Okay. So a few other trees fall in the process of selective logging. That would be like nature dropping a few trees in a windstorm. An approach to clear cutting that would get my approval is to make the clear cut in strips perhaps 200 feet wide leaving the old growth on either side. As the clear cut grows for say another ten to twenty years, then it is time to do the next 200 foot strip. That would manage the forest the way nature would do it with fires and windstorms.
June 16, 2011 at 7:45 AM

And just like AQ, they have taken a noble aspect of society and twisted it's virtues to only benefit their own extremism.

kaBLOOnie Boonster said…
1 More Mile, I too think that the rank and file environmentalist in the suburbs is into it mainly for sentimentalism and feeling good. Only their leaders are Marxist.
June 18, 2011 at 7:56 AM