Smartphone App for Not Losing a Son

March 12, 2011
Consider how easy it is to be a member of the amateur commentariat. No wonder we don't get paid for it. Then again, look at how easy it is to be an amateur anything: you only do what you want, when you are in the mood to do it.
What a remarkable talent it must be to be a novelist, and to put yourself into other people's heads and hearts. I will never be able to do that well. The extreme difficulty of doing this was brought home to me today.
The local bicycle email group notified us of a cycle touring guy who was going through the Little Pueblo, trying to raise awareness of the dangers of texting while driving. His college-age son had been killed recently on his bicycle by a distracted driver who was paying more attention to texting than driving. Most of the local cyclists were out of town for a special race, so I am the only one who rode out halfway to escort him in, to honor him and his cause.
He was some kind of medical doctor, and a very personable fellow, easy to talk to. A local rider was hosting him overnight. All three of us went out to lunch. 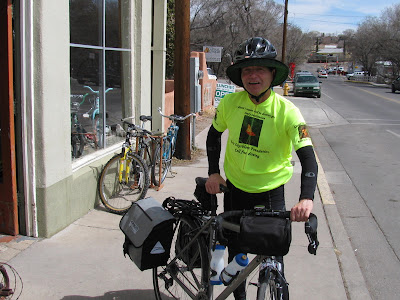 What does a man who has no children, like me, say to a father who has unexpectedly lost his son in the bloom of youth? He must have it harder than, say, parents who lose a son in a war, since they are aware of the possibility than their soldier won't come back, and they know that other parents are going through the same thing.
We've all made the mistake of giving a speech to console somebody about death in the family. No sooner than the words get out of your mouth than you realize how banal the platitudes sound, as if they are just cliches from a mass-produced Hallmark Card.
Grief doesn't want to be blunted before its natural cycle is over, no matter how good your intentions. I've made that mistake once or twice and was surprised at how nasty the reception was.
But it frustrated me to just give up like that. I was tempted to invite him to see something tomorrow which I think would mean something to me if I was in his shoes. (But since I'm probably wrong, I will leave the man alone.)
In the old mining area overlooking the Little Pueblo there is a vertical mineshaft that has been covered with steel mesh. It has taken me two years to find it. A bicyclist can ride over mesh. It is a "dare" that we tease visitors with. You could also walk into the middle, lie down, and stare into the abyss. This would make quite an impression on anybody, but especially on those of us who freak out when they see mine shafts going into the ground.
If I were this father I imagine -- probably incorrectly -- that at noon I would walk out into the middle, lie down on my stomach, and look down into the terrifying vertical shaft, while imagining what lies beyond what I can see. Then I'd drop a smartphone with my son's phone number into the mine shaft. How many seconds would you hear nothing? Then it would bang the side and go into a fast spin. Then another bang, and another, each one growing fainter. Finally, silence. Then I would scream as loud as possible, until I ran out of breath or injured my throat.

I'd never really know whether the smartphone broke while it was still falling, or whether it reached the bottom of the mineshaft first. And there must be a bottom, with the shaft and with Grief.

Anonymous said…
Undoubtedly this mourning Dad has taken on this mission to give some meaning to his son's otherwise senseless demise. I often marvel at how others cope. I am acquainted with two couples who had children who suffered from Cystic Fibrosis. Three of five lost to one couple and three of six to another. I met the adult son of one couple. He ran their family business and was planning a trip to Vegas with his GF, the next thing we knew he was in the hospital awaiting his second lung transplant. He died on the operating table during the procedure. Outwardly his parents were and still are among the apparently happiest outgoing and friendly people we know. How do they do that? I can only wonder. The other couple only spoke of their living children. She became a widow, and we only learned about her other kids from her obit and her daughter when we attended her funeral. She is greatly missed in our community for her unfailing cheerfulness. Again, how did she pull it off? If only I could ask?

kaBLOOnie Boonster said…
Thanks for relating these experiences, Tom. You were eloquent enough; I'm not going to try to add to it.
March 14, 2011 at 12:28 PM