Last autumn we were really enjoying the morning coolness during the doggie ritual. If only there were some place that had ten months of autumn, and two months of suffering, just to remind you how lucky you were most of the time. The autumn patterns with flowers, seedheads, and migrational birds seem a little different from last year. One yellow flower has taken over the field, so I stopped to photograph it: 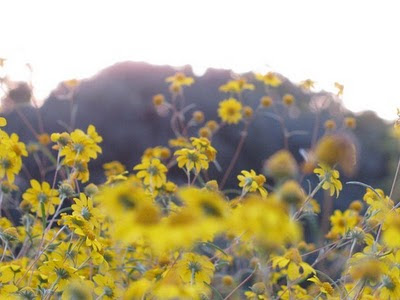 But I never really finished the photo-op. There was a "hurt animal" sound nearby that sounded like my little poodle. I charged off in that direction, while yelling as loud as possible. I saw what looked like the back end of a coyote run off toward the main arroyo. I didn't see his head, but assumed that he was carrying off my little poodle to kill and eat in a minute.

The worst thing was knowing that my actions in the first few seconds might have life-or-death consequences, but I could only guess what to do. If only the little poodle wasn't such a non-barker! I looked for him in the direction that the coyote had run. In a minute we saw the coyote on the other side of the arroyo, staring back at us with an arrogant and bold look, somewhat like a coyote that I photographed at an animal shelter a couple years ago: 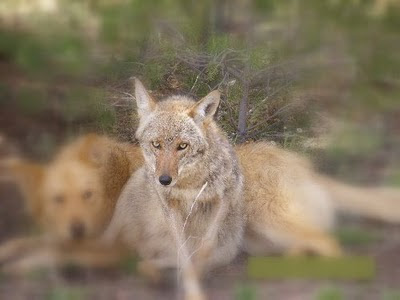 But why didn't he have my little poodle in his mouth? At any rate my younger coyote-sized dog, Coffee Girl, charged across the main arroyo and chased the coyote out of the neighborhood. Good girl! Isn't it amazing how even lovey-dovey dogs can turn on the ferocity when it is needed, as this photo of her a year ago shows:

Since the little poodle has fooled me before with miraculous survival stories -- see the "Disney Movie at Book Cliffs" tab at the top of the screen -- I decided to walk towards home. Anything was possible!

Just before crossing a secondary arroyo and entering the RV park proper, I couldn't believe what I saw: the little poodle was staggering to cross it. In the first couple seconds I could see blood on his leg, but there was no blood spurting out of an artery, no guts falling out of the abdomen. For the first time in his life, he seemed happy to be carried. When I got him home he collapsed on the rug outside my RV: 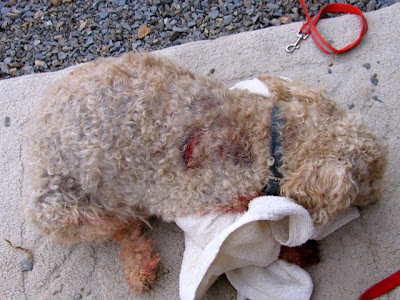 The most visible wound in the photo, on his back, was not deep and wasn't bleeding much. The more dangerous two wounds were on the throat, close to the carotid artery. But the coyote had missed. It was a relief to see steady breathing.

My neighbor in the RV park is a retired veterinary technician, who has quite a few supplies for her own dogs. She was generous enough to come over and shave off and dress the wounds with antiseptic, so he would be ready for the vet on Monday morning. My mood improved by the second as she worked away. Maybe even the little poodle could tell he was under expert care that he needed, because he was the perfect little patient, standing there. 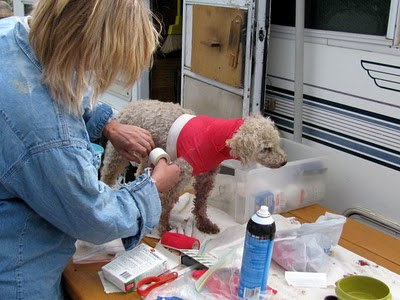 
My little poodle has recovered wonderfully from his wounds after the coyote attack of 12 days ago. He even insisted on returning to the evil field today, with the leash on of course. In the aftermath of that attack I was amazed by the generous care of a woman in my RV park who used to be a veterinary technician.

Another woman, who used to live here and had heard of the coyote attack, showed up at my door. She is only five feet tall and weighs about a hundred pounds; but if I had blocked the door, I think she would have knocked me out of the way on her way to cooing over the little poodle. When she lived here, we barely acknowledged each other's existence.

This reminded me of the opening of Arthur Schopenhauer's dreadful essay On Women, which nonetheless started well with a quote from Jouy: "Without women, the beginning of our life would be helpless; the middle, devoid of pleasure; and the end, of consolation."

Nature was certainly erupting that day, if you are willing to see homo sapiens as an animal species. These two women displayed an assertiveness about helpfulness that was almost violent. No wonder people living thousands of years ago made a goddess of Mother Nature. And we were part of it: I took a weapon to the grassy field on the next walk with my larger dog, Coffee Girl. It must have looked foolish to anyone else, but it provided me the delicious fantasy of burying that weapon in the skull of the coyote.

Something that a couple people said irked me greatly; they said that, after all, the coyote 'was here first,' and so they hoped he wouldn't be killed. Here first? What did that mean? If they wanted to trot out that cliche for an attack in the zillion-acre wilderness area north of here, fine. But this attack took place on private property in the city limits.

This got me thinking about the movie Dances with Wolves, starring Kevin Costner. After so many years of full-time RV travel, how did I neglect to visit the hilly South Dakota grasslands where the movie was shot? I rewatch it from time to time to focus on the cinematography and John Barry's soundtrack. The script is dreadful. Consider these immortal words of the protagonist:

"I'd never known a people [the Sioux] so eager to laugh, so devoted to family, so dedicated to each other. And the only word that came to mind was 'harmony.' "

When will the environmentalists of the world hire a new prose stylist? Still, the movie viewer can be thankful that Kevin Costner didn't rattle on about how each cloud, weed, or rock was 'sacred to the Native Americans.'

But just when I decided that the movie's script had no hope, they fooled me. The Sioux and the Pawnee had a battle, and the Costner-character volunteered to help his hosts, the Sioux. After the battle he said:

"It was hard to know how to feel. I'd never been in a battle like this one. There was no dark political objective. It had been fought to protect the lives of women and children and loved ones just a few feet away."

Is it not amazing that the Hollywood liberal-weenie who wrote the script had enough of a connection to real nature -- not coffee-table book nature -- to see that violence was a legitimate part of the DNA of male homo sapiens?

The poodle recovered. A few months later, the coyote was long forgotten. One morning my dog, Coffee Girl, and I got off to an early start, riding to a grassy ridge that features a 360 degree view. Halfway down the field I lost track of her. I stopped and turned around. Where the heck was she?


Then I saw her streaking down the trail towards me, and at maximum speed. It was impressive and beautiful, the way she runs like a black horizontal streak, but something was wrong. Two coyotes were in hot pursuit. The leader got within 50 meters of me before he noticed me charging him on the mountain bike.

He quickly turned away from the trail. In the tall grass I couldn't chase him down. He did the usual: he ran to the back side of a juniper bush until he could just see me through the branches. How wary and observant they are!

I am really getting to hate coyotes but until I think of a way to vanquish them, I must settle for fantasies: imagine dragging its carcass behind my mountain bike and riding triumphantly across the field, like Achilles did to Hector's body, in front of the topless towers of Ilium.

Coffee Girl was unharmed. Thank goodness she has enough sense to run back to Papa when she is in danger. She was in a good mood today, having enjoyed the excitement perhaps.

Later I finished my own bicycle ride and was relaxing at the usual coffee shop; I had a nice conversation with a couple of hikers who had just finished a hike in the national forest. They were good people, yet I felt estranged from them as I always do around "nature lovers" who see Nature as a postcard. They do their best to find an intermediary between themselves and Nature: they use heels and cameras. But they lack a dog as the ultimate psychological stepping stone.

On the ride home a car beeped needlessly when it was exactly even with me, even though I was doing everything right. As usual I tried to see this as an advantage: a reminder of risk and thus a partial remedy against the complacency that goes along with not encountering a jerk for several months.


The same thing happens on my dog-walks in the grassy field. I hadn't seen a coyote since one attacked my little poodle last autumn. This is the first time I've ever seen two working as a team. This caused a certain complacency to seep in. What an insidious thing complacency is; you are unaware of it until it is almost too late. Maybe I should tie a bell around Coffee Girl's collar and call her back when she gets too far away.