What Makes a Walk Perfect?

It is almost funny how people can get interested in things that don't seem terribly interesting to most.other people.  The little dog and I had a perfect walk yesterday.  It surprised me how unspectacular and accessible 'the perfect' can be.  The rest of the day it seemed important to understand why it was perfect.

For one thing, the walk started right at camp.  It is nice not to drive to a hike -- that would remind one of 'commuting to work' back in the rat-race.  I once had a hiker-friend who laughed when I told him that half of the sport of hiking consists of driving around in some damn car.

It began with a rough and half-filled-out plan.  It would be a 'bushwhacking', non-official route.  The answer was not completely known.

On a winter day in the Southwest, calmness almost guarantees a beautiful day. The air was still chilly -- but not cold.  No bugs would be seen today.  No snakes, no lizards.  But the little dog did harass a grasshopper. The sun finally found some weak spots in the clouds.  The sky is best when it has an ever-changing balance of clouds and sun -- a conflict between the two.  And you don't know who will win.  I decided not to wear a jacket.

What a pleasant surprise it has been to see my little dog adapt to the sharp rocks around here.  I try to avoid them as much as possible.  That means doing most of the walking in the arroyos, where water-slurry has rounded the rocks.  How does the little dog avoid the stickers?

At the beginning you can't distinguish one gully-arroyo from another, or one ridgeline from the next.  Random chaos.  Partly due to necessity, the walk develops a unifying thread to the land.  By the end, you can visualize the sub-branches of the arroyo and how they connect to the main.  It was no longer a random pile of rubble.  Water flow -- and there "ain't no water" -- had made it into a story. 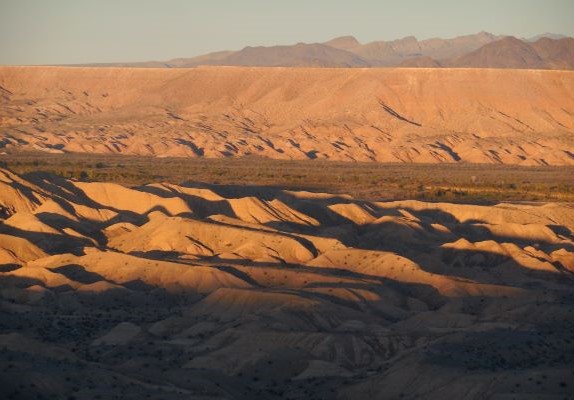 Anonymous said…
So glad you and the little doggie had a "perfect" walk. It is hard to find perfect moments, but a delight when they appear. Makes me think of the poem that starts out "When you come to the end of a perfect day, and you sit alone with your thoughts..... Do you think what the end of a perfect day has made to a tired heart?" (By Carrie Jacob Bond)
December 7, 2022 at 6:00 PM

kaBLOOnie Boonster said…
Thanks, Anonymous, the poem fits the occasion.
December 7, 2022 at 6:15 PM