Last episode I wrote about revisiting a place that used to be a good place. Although disappointment and anger are to be expected in situations like this, a person has to be careful about complaining to newbies.

Otherwise a guy will sound like a grumpy old man. And besides, it is depressing to newbies to be told how crappy things are today. So -- without any facetiousness -- I am going to shock the reader.

We had a nice mountain bike descent down an ATV trail, into a hard-bottomed and wide canyon. The surface was packed by the machine traffic -- in olden times the surface was so loose I could barely ride it.

We had the canyon to ourselves -- there was nobody else there. The geology was as interesting as ever.

When it dawned on me that I was actually benefiting from the heavy traffic -- and of the worst kind -- I felt so relieved that I wanted to sigh out loud. It is so nice not to be on the losing end of societal changes.

Sometimes I remind myself not to let changes get me down. But this feels like repression, and repression doesn't really inspire. Also, it feels like you are just dumping deodorant on the truth.

It sometimes works better to swing over to the other side and push positively and emphatically. 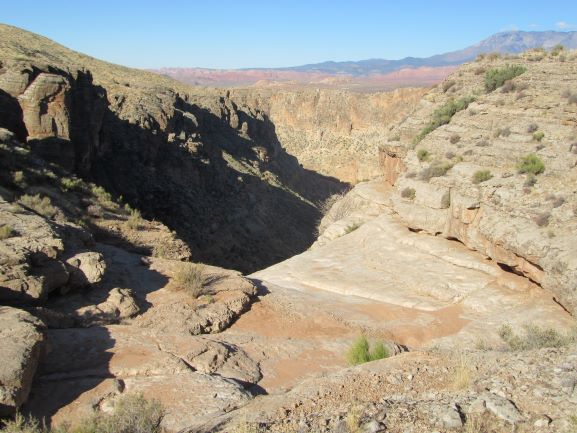