Let's ignore Tolstoy's (and my) disagreement with how the word, "Art," is typically used; that is, let's pretend that "Art" really does mean "pretty stuff" made by the human hand and imagination.

Still, I could go to dozens of art festivals per year, as I travel, and find little that actually inspires me. And yet we saw it today. Maybe it wasn't so much pretty as creative and ironic.

We were mountain biking near the edge of town, where people used to dump debris of the usual kind. The good news is that most of this dumping happened a long time ago, as evinced by the extreme rustiness of the cans, wires, and buckets.

Trail builders or users had gathered up this rusty debris and decorated juniper trees along the trail. At one point somebody had built a "maze" out of a hundred cans. I started to look forward to the next 'sculpture' of rusty debris. I was tickled by some people's ability to turn lemons into lemonade.

Antiques don't have the same effect on me -- so why were these rusty "sculptures" along the trail so interesting? Perhaps it is that magic word, autochthonous. It was easy to imagine the land or milieu as the real artist, with the rusty sculptures growing naturally out of that land, as a form of irrepressible expression.

When that happens, the ego of the artist disappears -- the art becomes un-self-conscious. It no longer seems artificial and contrived. For some reason, that makes art delightful. Looking back over the photos I have taken over the years, I see a lack of photos that really capture this idea. 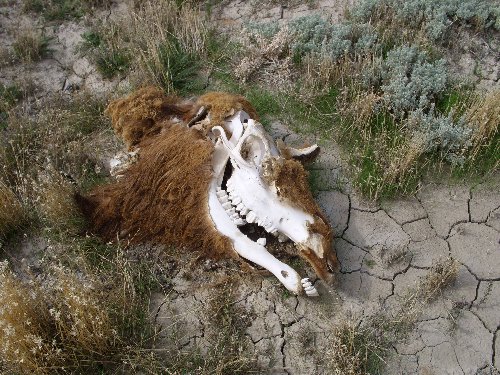