The "Hustler" in Sidewinder Canyon

September 15, 2012
"Tawniness" is the perfect camouflage on BLM land, and yet the beast's tawny color was so bright in the morning light that I could see him more than a half mile away. The bright tawniness doesn't come through in the photograph, but let's hope the reader won't claim that he can't see the mountain lion in the photograph: its ears erect and alert, waiting and warming in the morning sun, perching on a ridge, ready to leap down on its unsuspecting prey and grab its neck. Soon this mountain biker would be on the trail right in front of nature's most magnificent predator, and below him. 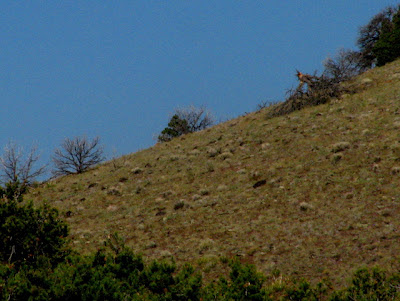 But as it turned out, the morning was a little less disastrous than all of that. Nature's most magnificent predator turned out to be a broken tree, with prongs that made it look like ears. I claimed to be disappointed.

How silly! This is what happens when you read Jack London's White Fang the night before an outing. Early in White Fang's puppyhood his mother and he had an epic battle with a lynx. That was a great chapter or two in the book. London did a fine job imagining what the world looked like to a curious wolf pup who had just left the safety of the den. Since I had a puppyish dog along on the ride, running off leash, it was easy to imagine myself being moved into London's book even though I was doing a most unbookish activity, riding a mountain bike on deserted BLM land near Del Norte, CO. What would be the wolf pup's next adventure?

It didn't take long to find out. My dog, Coffee Girl, has a strange obsession with flying birds. It probably goes back to her days being harassed by ravens. An unusually large red-tailed hawk was flying low to the ground, so off Coffee Girl went, with everything she had. 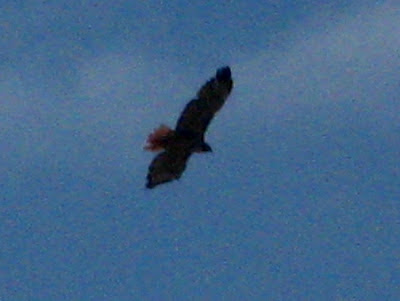 Other than the size I would barely have noticed the hawk. But with Coffee Girl's antics my imagination was pulled back to White Fang's first close-call out of his den: a hawk had nearly attacked him, but it chose the ptarmigan mother instead. (She had been valiantly defending her chicks against White Fang.)

I hope the reader has seen the classic movie, The Hustler, starring Paul Newman, George C. Scott, and Jackie Gleason. Just think: they still made black-and-white film noir in 1962. Most of the scenes were dark and grim, except one, in which the Hustler (Newman) and his girlfriend leave the urban grit of New York City and head off for a picnic on a slope above a lake. They relax on a blanket and take in the view.


The Hustler to his girlfriend: Do you think I'm a loser?

He had been told that he was by the Gambler (George C. Scott), despite enormous talent playing pool. It was because of his character flaws. The Hustler started to admit that it might be true, as he recounted a string of recent mistakes.


Girlfriend: Does it bother you what he said?
Hustler: Yea. Yea, it bothers me a lot.

One of his mistakes was showing how good he was and winning a lot of money from some second-rate players, instead of disguising his ability as a good hustler should. It got him beaten up.


Hustler: I could have beaten those creeps and punks cold, and they never would have known. I just had to show 'em what the game is like when it's really great. Anything can be great. Bricklaying can be great, as long as the guy knows what he's doing, and why, and if he can make it come off.

And when I'm going, when I'm really goin', I feel like a jockey must feel. He's sittin' on his horse, he's got all that speed and power underneath him, and he's coming into the stretch and the pressure's on him. He just knows when to let it go and by how much, because he's got everything working for him, timing, touch... that's a great feeling.

It's like all of a sudden I got oil in my arm. The pool cue is part of me. It's a piece of wood, with nerves in it. You can feel the roll of those balls. You don't have to look -- you just know. You make shots that nobody's ever made before. Ya play that game like nobody's ever played it before.

Girlfriend: You're not a loser, you're a winner. Some men never get to feel that way about anything.

"Anything can be great." I think we can all learn something from the Hustler. How many RV travelers really try to make their lifestyle great? Or are they content to pleasantly while away their waning years doing the standard, expected things?; the boring RV parks with organized and stereotypical "activities", the endless hours of satellite television, the innumerable potlucks, the routine windshield tourism and sightseeing. Are they being "men of low intent", as the Mobile Kodger put it?

For my part I'm going to keep pushing on the mountain bike pedals, and watch my wild girl chase prey over spacious empty BLM land. The bike, the dog, and the land -- they seem like extensions of me. That's the game. It can be really great.

Anita said…
You don't know what can be great to OTHER PEOPLE. You assume that everyone else is missing the GREAT things that you enjoy. An RV camp might be great to someone who has spent most of his life in the city and
is afraid of the wide open spaces where a broken tree could be a wild cat.
By the way, Jack London's books are for teenaged boys. You need more adult reading.
September 15, 2012 at 9:51 AM

Thom Hoch said…
I keep fighting the "standard expected things" of RV life and appreciate the occasional booster shot from you. Thanks.
September 15, 2012 at 9:56 AM

Teri said…
Great post. Would have been great to actually see a mountain lion. Some of the trails around Mesa Verde have warning signs about mountain lions. I am workamping and will for around 5 years, then I plan to explore more BLM land. I am using this time to get my RV ready, changing out the fridge, adding solar, beefing up the suspension, getting rid of the dinette, etc. I want to bike more, but have to build up the strength in my legs, I found it easy to ride around Texas for hours at a time last winter, but am having a difficult time riding around the hills near Mesa Verde. I don't own a TV. But, I have to be connected to the internet. I don't even watch movies, do you watch via the internet? Or do you have a collection of movies? I think a big percentage of the RV'ers are just enjoying their retirement, living the same way they always have, but in an RV instead of in a house.
September 15, 2012 at 10:42 AM

Tesaje said…
My collie dog also has a thing about raptors but I don't think she was ever harassed by any. They really make her go crazy. I think she thinks she is herding them off. She has a bit of a problem, that many people also share, in thinking that correlation always equals causation. She barks and chases, they fly off - works every time.

I would be very afraid of what my herder would do if she encountered a cougar. She is very brave but her genes are for a pack and the cougar is the quintessential hunter with even better tools. A pack of dogs might be able to chase one off, but I doubt a single dog could. I believe your Kelpie shares a lot of genes with collies. That's why I keep working on obedience with my young dog. I want to her to reliably stop and drop whenever I ask her. The problem is that she is very smart and is not always convinced that I know best :-)

Isn't that the question for any life? What to do to make it a worthwhile life? The RV and mountain bike are a means for you. But, then perhaps a lack of self-awareness makes for a happier life. Sometimes I wonder.
September 15, 2012 at 3:06 PM

kaBLOOnie Boonster said…
Anita, Certainly I can't be sure of what's going on inside every RV park-ers head, but I've spent enough time in them to confidently say that they're just cocooning.

Thom, it REALLY is hard to escape mimesis when you're surrounded by a hundred RV park-ers who are "all the same. Keep fighting it!

I spent my first winter in a great Winter Texan park. At the end of winter I found my groaning when I got out of a chair, just like I too was an old man instead of a man in his forties. That scared me.

Maria, thanks for the compliment. I think people who spend a lot of time alone just naturally fill up their time by letting their imaginations run "free range."

Teri, I've yet to see my first cougar. About your frig swapout: you would save a lot of money going with a Whynter 12 volt compressor frig. I like mine.

Hills giving you a problem on your bike? Aw come on, they have 27 gears!

I too like internet but not for movies, with a 5 GB monthly cap. I own DVDs of classic movies.

Tesaje, "How do you make a worthwhile life?" Avoid too much philosophy and kill your television as Step One.

In a real confrontation with a cougar we and our dogs would probably be helped most by not ACTING like prey. I hope.

OverTheTopCargoTrailer said…
I know lots of people paying $20,000+ per year in property taxes, on million dollar homes, they all seam to be pretty happy. Its just I don't know if any of them ever blog about how happy they are ? They fly around the world on long vacations and stay in 5 star hotels with first class service.

The Good Luck Duck said…
Hmm. I tend to agree with you fully, yet, when I get a chance to sit for a while in an RV park (getting water or propane), I try to imagine the joy those folks are feeling. Being out of the city, away from their jobs, maybe trying to provide a good time for their kids.

Then we roll again and head for the forest or the desert with no neighbors in sight, and I sigh with relief.

I want people to try boondocking. Iin the end, though, I'm just as glad they prefer the parks. It leaves the wilderness for us.
September 17, 2012 at 10:45 AM