September 26, 2012
Abiquiu, NM. On a day of ooze and muck, it is time that I came clean. Much as I love to debunk four-wheel-drive vehicles and brag about how well my rear-wheel-drive van pulls the trailer through the mountains, I sing a different tune when the dirt roads become wet. When I learn there is clay in the road, the tune stops altogether. Fortunately a Forest Service guy gave me fair warning.

He also explained why these high ridges north of Abiquiu are so attractive: they burned 100 years ago and the trees haven't been able to get reestablished, resulting in a balanced combination of pastures and forests. It never gets better than this.

I was experiencing a great success primarily due to telling the internet where to go. This allowed me to expand, almost euphorically, into new ground. Nothing makes western North America get BIGGER than kissing off the internet. So I'm exploring the northern counties of New Mexico contained in the highway loops formed by US-285 on the east, US-84 on the west, and Abiquiu/Espanola on the south. Actually it's not really internet-free, but it's almost Verizon-free. Fortunately Verizon allows roaming here (the so-called Global Access network), which is working quite well along the highways.

On the mountain bike ride I saw and heard the largest and noisiest herd of ovine-Americans that I've ever seen. Perhaps 200. I was surprised at how rampaging and "army-like" a large herd of sheep can seem, and how quickly they move along the pastoral ridgelines at 9500 feet.

On the return trip they waylaid me right on the dirt road. Hey wait a minute. What about that warning about the "livestock protection dogs" of a couple posts ago? I stopped and watched the sheep herd for ten minutes, but saw no giant man-eating sheepdogs. How disappointing!

The next morning the herd was right outside my front door. Coffee Girl was excited. She has learned not to harass cattle; maybe it's time to do the same with sheep. But just in case, I left her inside the van and went to check for giant sheep dogs.

There were two of them, a matched pair. They saw me before I saw them. They don't really stand out since they're the same color and size as the sheep. 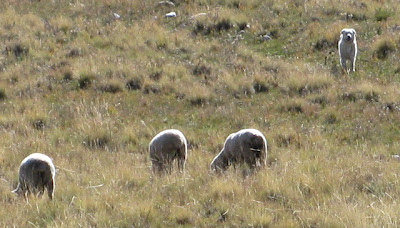 They walked toward me, but then stopped. They wouldn't leave the herd. They didn't look so scary. I didn't want to push my luck but government agencies love to, uhh, cry wolf; that is, they give exaggerated warnings to citizens who they see as their dumb sheep.

In fact the two sheep dogs seemed amazingly professional. I watched them for a few minutes to see if they would stay in the center of the herd, try to lead it, or go back to round up stragglers. I swear that somebody had a bell around their neck.

Which breed do you think they belong to? (As usual, click to enlarge.)

For such a reputed curmudgeon and cynic I find the romance of high pastures, Basque shepherds, sheep dogs, and cougars to be irresistible. Guess which DVD movie I'll fall asleep to tonight? Hint: made in Australia in the 1990's, and features a lot of talking animals.

Tesaje said…
Great Pyrenees. They probably pose considerably less risk to you than to your kelpie. You didn't do anything threating to their sheep so they wouldn't see any reason to attack you. Your dog though, they might consider quite a threat. Especially if she started moving towards the sheep in an attempt herd them.