Clicking the Camera Versus Taking a Photograph

October 29, 2016
This is the wrong time of year to talk about this photograph, but I can't help it. It should be presented at the end of May or whenever tedious speeches are given all over the country at graduation ceremonies. You know how it goes. The speaker drops into a stentorian tone of voice, "...and furthermore, students and parents, let me remind you of one more thing: that this is a Beginning, not an Ending." Or something like that.

The idea is basically correct. We shouldn't be throwing tomatoes at the pompous speaker just because the phrasing is so hackneyed.

Take this as an opportunity. Many of the most important truths in life lose their force with repetition. Rather than switching our attention to trivial novelties, the timeless and classic Ideas need to "reincarnated" in particular situations, with characters that we actually care about, so that the Truth matters once again. That should be the mission of novelists, screenwriters, painters, and photographers.

Mother Nature presented me with lots of eye candy recently, in central Utah.  Like anybody armed with a digital camera, it was easy to be trigger-happy. But I reminded myself that neither I nor anybody else in the world needs one more pretty postcard.

Of course, sometimes there isn't time to really think about the ideas or metaphorical interpretation of a photograph. You just have to click the shutter, and then delete 95% of the pile. Every now and then, you find a photograph that means something. 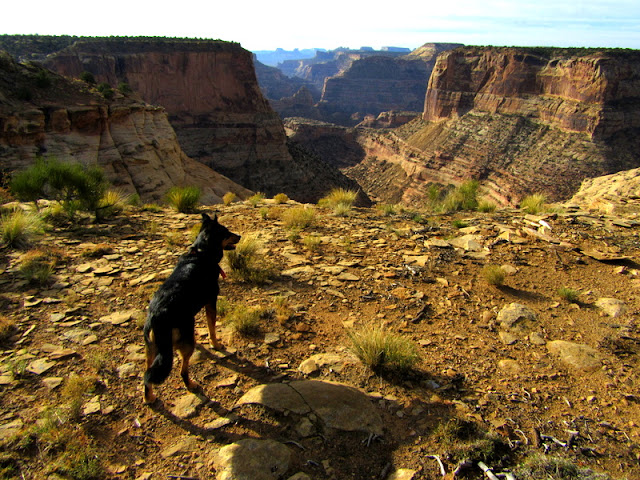 Ed said…
I'm not sure what it might mean. However it looks to me like this picture was taken in May of a Grand Canyon formative year. You and Coffee Girl have aged well!
October 29, 2016 at 7:28 AM

Wayne Wirs said…
The caption is the key. The caption connects the photo with the message of the blog post. Without the caption, the connection is usually lost. The whole reason for uploading a photo/post (I hope) is to communicate a thought, so to make the reader "work for it" is really just a way of saying, "See how smart I am!" :)

For example, see my last post. There is no way the reader would understand the connection between the photo and the text without the caption. I saw it (obviously), but I wanted the reader to see it also. Connecting the three (text, photo, caption) makes for a much more powerful and memorable story.
October 29, 2016 at 9:16 AM

kaBLOOnie Boonster said…
Gee, for a metaphysician whose head is supposed to be in the clouds, you can be downright practical, Wayne. (grin)

I agree that a caption or title is usually necessary in order for the viewer to make the connection.
October 29, 2016 at 12:22 PM

Anonymous said…
That photo will be October in your 2018 Coffee Girl calendar. It's really nice and stands strong even without a caption.