On Perfecting the Human Sole

September 12, 2011
There is supposed to be at least a grain of truth in old adages and proverbs. Take, as an example, 'Invent a better mousetrap and the world will beat a path to your door.' Sigh. I'm still waiting for Nike or some other big shoe company to beat a path to my door and offer a six-figure buy-out for my invention of the ultimate bicycle footwear.

For instance look at these upscale cycling shoes carefully: 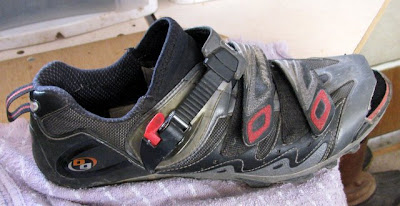 We can laugh off the toeless innovation as being inappropriate to hiking. But look at the ratchet-strap. What a marvelous device for footwear: you could build shoes extra wide and then let people cinch them up, in seconds. A shoe that fits a wider variety of foot widths could easily lead to more comfort and cost-savings, across the shoe industry.

For hiking shoes, I would guess that the ratchet-strap needs to be in the lower, toe-box, position.

Although traditional laces can offer a lot of width adjustment, they are slow and cumbersome, so you tend not to do it when you're on the trail. It's important for the tongue to go down close to the toes, so that the toe box stays adjustable.

I'm convinced this would revolutionize hiking footwear. But what good is it for customers to be happy? Let's talk about making the industry happy. Look at the two screws at the toe in the bottom of the cycling shoes: 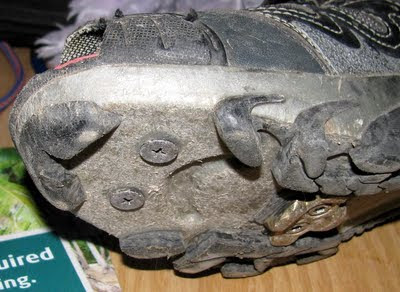 Although I've never had a pair of them, you are supposed to mount toe pegs with these two screws, in order to climb steep hills after stepping off the bike. (Some bloggers prefer to dismount the bike with more unconventional techniques.)

But why wouldn't such toe-pegs be advantageous to hikers on steep climbs? The industry could offer hard rubber, steel, titanium, unobtainium, and metal matrix composite toe-pegs. Equipment forums would hum with the polemics of tech-weenies arguing for their favorite. As the industry evolves, the metal toe-pegs could be improved to foam rubber, which would be ultra-light and wear out in two weeks.

A shoe company, with the same business model as Apple Computer, would offer toe-pegs with eccentric, seven-sided screws that were incompatible with the rest of the industry, and cost three times as much.

But it was time to stop making fun of the footwear industry and buy a new pair of waffle stompers. Weighing all the pro-s and con-s, I decided in favor of the prestige brand offered by Walmart, Ozark Trails ($20). My guess is that they're made out of the same materials -- and in the same country -- as $130 boots with labels such as North Face, Salomon, Keen, etc. I'm still wandrin how my hiking partner controlled the green-eyed monster when I broke these boots in, on our first hike. He refused to be impressed, even by the perfect match with the hiking socks. 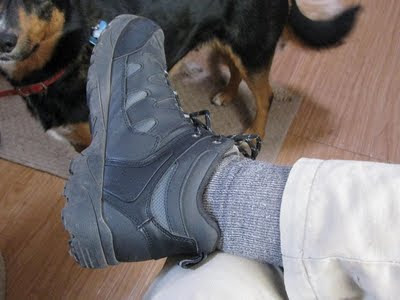 Maybe I should try harder: say, Smart Wool hiking socks at $20 per pop.

Glad to see that you have gone for the high $ prestige brand boots offered up at the China Outlet store.

I have been web shopping for new walking shoes and have made 2-3 decisions already but have purchased nothing. I'll probably try to stretch a month or 6 weeks more life out of what I now have. They might not make it that long, I have a wear spot now on the toe of one, the ball of the foot on the other and the bad heels that you saw.
I do need to spring for the new SmartWool socks before I leave Albuquerque. The $20 a copy is hard to face up to but my experience has been that they last more than twice what a $10 pair do.

Ted said…
That's one way to go, Boonie, and certainly a viable choice if you can find a cheap pair that fit and perform well enough for your needs. They probably will last about as long as the more pricey brands. Good luck with them.

I ordered a pair that REI had on sale for a hundred bucks. The reviews there and on other sites were excellent, the boots' good points seemingly aligned precisely with my needs and desires. We shall see. I'll thoroughly test them out and if they don't measure up I can return them for a full refund and maybe go shopping at Walmart for something like your new ones.
September 13, 2011 at 5:58 PM

kaBLOOnie Boonster said…
Ed, I've never understood what was smart about SmartWool. Nylon and acrylic are stronger. I once saw some graphs of the insulating properties of various sock fabrics, when WET. Good old-fashioned, low-tech acrylic did best. That's what socks were made of in the 1950s.

Ted, I wish you luck with your $100 REI boots. But remember, no good deed goes unpunished. Keen punished me for spending $110 for their hiking boots; they were no better than cheapo sneakers.
September 14, 2011 at 11:44 AM